Judge Alito’s approval numbers are up since the hearings. And, 60% of Americans say they followed the news stories… This just can’t be good for democrats. 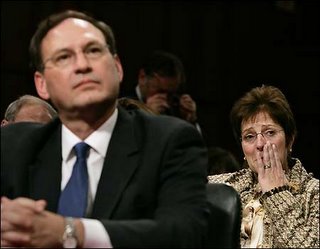 After Senator Lindsay Graham apologized to the Judge’s family for the behavior of his fellow committee members during the course of the last three days, Judge Alito’s wife, Martha-Ann Bomgardner, broke down in tears and had to leave the session to regroup on Wednesday, January 11, 2006. (SFGate)

All of the pomp and circumstance put on during the Alito Confirmation Hearings seems to have backfired for the democrats. Rasmussen Reports confirms that the hearings boosted Alito’s support:

As the public hearings come to a close, 60% of Americans say they have been closely following news stories of the confirmation process. That’s the highest level of interest in the story since Alito was nominated last fall.

Thirty-nine percent (39%) of Americans now say Alito should be confirmed. That’s up from 33% in early December and from from 30% when the Alito nomination was first announced.

A separate survey found that 40% of Americans have a favorable opinion of the Supreme Court and 49% say it has the right amount of power.

By a 63% to 7% margin, Republicans believe Alito should be confirmed. By a 44% to 16% margin, Democrats take the opposite view. Those not affiliated with either major party are evenly divided.

How much the “tear factor” may have played a part in his approval rating was not determined.

The CNN-USA Today poll earlier in the week showed similar support for Alito.

Democrats do not see how they will be able to block Alito from becoming the next Supreme Court Justice.

The Senate is currently haggling over the timeline for Judge Alito’s confirmation vote.