Greenpeace joined a number of Leftist organizations in a harassment lawsuit against the government today. New Zealand blogger Sir Humphrey’s points out that Greenpeace knows quite a bit about harassment, themselves. 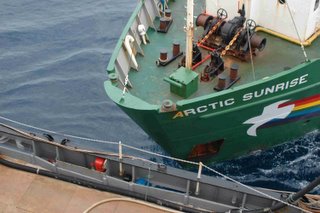 The Japanese Institute of Cetacean Research displays this photo just before the Greenpeace Arctic Sunrise rammed the Japanese whaler Nisshin-Maru.
(video of the incident is below)

Greenpeace joined a number of Leftist groups today in a law suit to halt the President Bush’s domestic spying program:

The New York suit – filed on behalf of the center and individuals – names Mr. Bush, the head of the National Security Agency, and the heads of the other major security agencies. It challenges the NSA’s surveillance of persons within the United States without judicial approval or statutory authorization.

The Center for Constitutional Rights maintained its work was directly affected by the surveillance because its lawyers represent a potential class of hundreds of Muslim foreign nationals detained after the Sept. 11, 2001, terrorist attacks.

It said its attorney-client privilege was likely intercepted as it represented hundreds of men detained without charge as enemy combatants at the Guantanamo Bay Naval Station in Cuba and a Canadian citizen who was picked up at a New York airport while changing planes, sent to Syria and allegedly tortured and detained without charges for nearly a year.

The group said the surveillance program has inhibited its ability to represent clients vigorously, making it hard to communicate via telephone and e-mail with overseas clients, witnesses and others for fear the conversations would be overheard.

HERE is the video of the ramming of the Nisshin-Maru by the rainbow painted Greenpeace Arctic Sunrise. (ICR)

Don’t try these stunts at home! 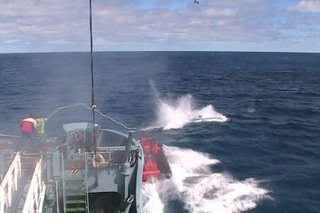 In another episode with Japanese whalers, Greenpeace representatives drive their boat directly in front of the harpoon of the Japanese ship that is going at a good clip. They were lucky the Japanese did not run over them let alone harpoon their dingy.

HERE‘s the video of the Greenpeace day out with the whalers. (ICR)
The Greenpeace folk don’t look like they’re recruiting the brightest whale lovers as they ride the waves in front of the ship’s harpooner. 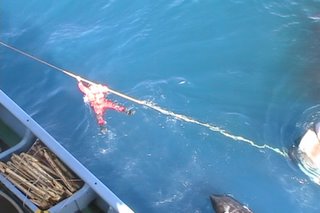 Since they could not stop the whalers from harpooning a whale the Greenpeace activists dive in the bloody waters to hang on the harpoon rope.

This type of behavior does not exactly define your normal upstanding organization. It is not inconceivable that the government might be concerned and want to keep tabs on a group like this.