This was supposed to be where democrats made up their ground on Republicans.
The “Culture of Corruption” campaign was supposed to leapfrog them back into control of Congress. But, it is not turning out that way…

About Half of Americans believe Congressional members are corrupt.

Congress’ image could emerge as an election topic, with 55 percent of respondents saying corruption will be “the most important” or a “very important” issue to consider when voting in November, when all 435 House seats, and 33 Senate seats, will be decided.

(Glenn Reynolds said as much in his New Year’s Day predictions. Not bad, Glenn!)

Here’s the money quote from the CNN article:

But when asked to identify corruption by party, respondents were more hesitant. About half of those polled said “only a few” members of either party are corrupt.

While President Bush’s Job Approval Rating has increased by nearly 10 points in the last month: 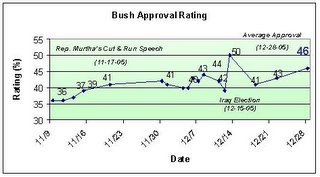 Don’t expect Democrats to make much headway in November if this trend continues.

And, here is more polling results from the Military Times Poll that was released yesterday: