Khaddam was a central figure in Syrian politics for over 20 years. 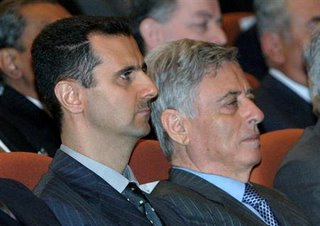 The former Vice President of Syria, Abdel-Halim Khaddam, is calling for a popular revolt against the Assad Regime:

Mr Khaddam told the BBC that Syrians were frustrated with the current regime and should be mobilised by the opposition groups in the country.

And he accused Mr Assad of being a traitor, denying he was one himself.

A UN inquiry implicated Syria in the murder of ex-Lebanese PM Rafik Hariri, but Damascus denies any involvement.

Speaking from Paris, where he has lived under protection since resigning his post in June 2005, Mr Khaddam said: “The Syrian people will take on themselves the responsibility for changing the government.”

“Public opinion is very frustrated and the Syrian people are quite unhappy,” he went on.

“There is an opposition in Syria which will find its way in leading the people to overthrow him.”

On Friday, Syrian President Bashar al-Assad denied that he threatened Rafik al-Hariri before the former Lebanese prime minister was killed:

The comments to Egypt’s El Osboa newspaper are Assad’s first in response to former Syrian vice president Abdel-Halim Khaddam’s attack on him last month. Assad has previously denied the same accusation when made by others.

In the interview, Assad accused now Paris-based Khaddam of scheming against Syria before resigning in June and also hinted that, as president of Syria, he would be immune from questioning by a team investigating Hariri’s February assassination.

Asked about Khaddam’s accusation that he threatened Hariri, Assad said: “This incident did not happen. The aim of spreading these allegations is to link the threat to the assassination. The game is clear.”

The Qatar Peninsula reported that Khaddam is confident that Assad is behind the murder of Rafiq Al Hariri:

Khaddam, who oversaw Syria’s domination of neighbouring Lebanon for 25 years, also said he would meet soon with members of the UN panel investigating last February’s assassination of former Lebanese premier Rafiq Al Hariri. Senior Syrian officials have been implicated in the case, but Damascus has denied any involvement in the killing, or those of three other prominent anti-Syrian figures since then.

In an interview with Newsweek magazine, Khaddam said no decision in Syria to kill Hariri could have been taken without Assad’s assent. “Nobody can take this decision but the president, because this operation needs a lot of resources, in terms of finance and personnel,” he said. “And no Syrian general can provide those kinds of resources, both financial and personnel, unless there is a (presidential) decision.”

Syria Comment Plus says that what matters is that today Syria is closer to getting Assad out of Syria than they were on December 29, 2005 and that is what matters.

Amarji has been discussing these hopeful developments in Syria. “The dogs are going at each other’s throats.”