Al is still considering a run for the Democratic Nominee in ’08! 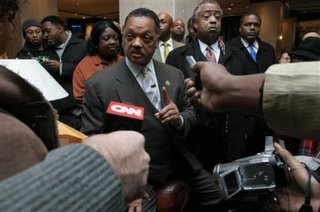 Democratic Leaders, Reverend Jesse Jackson, foreground left, with Reverend Al Sharpton beside him, foreground right, speak to a group of people which included survivors of Hurricane Katrina prior to a press conference kicking off the 9th Annual ‘Wall Street Project’ Economic Summit in New York Sunday Jan. 8, 2006. The four-day summit, entitled ‘A More Perfect Union: The Quest for Equity and Parity’ focused on key issues affecting minorities in the United States, including the reconstruction of Gulf states ravaged by Hurricane Katrina, pension funds and the lack of access for minorities to Wall Street. (AP Photo/Tina Fineberg)

“Reach out and learn in your own way to exemplify the tolerance that Martin Luther King showed,” Sharpton said.

“George Bush, after spending the week lobbying for (Supreme Court nominee Samuel) Alito, justifying wiretaps and explaining for the thousandth time why he did not respond to Katrina, will stand somewhere on Monday and piously act as though he remembers Dr. King, when in fact, he has stood against everything Dr. King represented,” he said.

Speaking to a reporter later, Sharpton laid out his priorities for the Democratic Party, tying them to King’s work. “A tone should be set about reviving the King agenda of social justice and fairness,” he said.

Al Sharpton has not yet decided if he will seek the Democratic nomination in ’08 or not.