Apparently, there was a reason Emily Miller was upset the day she cut off Colin Powell during a Tim Russert interview. She had discovered her boo was cheating. 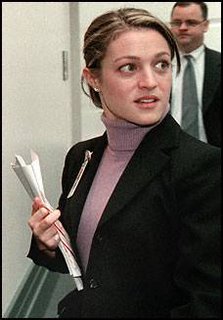 You can’t blame her for being a little short with Tim Russert, after finding out Michael Scanlon, her fiance, was getting more than his nails done by the manicurist. Getting those trains to run on time: State Department press aide Emily Miller. (Ray Lustig – The Washington Post)

According to Raw Story, after Lobbyist Michael Scanlon broke off engagement with Emily J. Miller she went to the FBI on him. Hence, heads roll:

Michael Scanlon found himself at the center of one of the biggest political scandals in Washington history as a result of cheating and lying—but not the type involving the numerous clients he was paid to lobby Congress for, former coworkers and friends of his ex-fiancee say.

Scanlon was implicated in the Abramoff scandal by his former thirtysomething fiancee, Emily J. Miller, whom he met in the late 1990s while working as communications director for former House Majority Leader Tom DeLay (R-TX), three former associates who worked with Scanlon at DeLay’s office said. Colleagues say Miller went to the FBI after Scanlon broke off their engagement and announced his intention to marry another woman… a manicurist.

In 2003, Miller left DeLay’s office to work at the State Department. Scanlon departed too, partnering with now-indicted conservative lobbyist Jack Abramoff in lobbying for an array of Indian tribes. As Scanlon’s star rose, troubles between the couple mushroomed.

In May , 2004, press aide Emily J. Miller, shocked both her boss, Colin Powell, and “Meet the Press” host Tim Russert when she ordered a cameraman to stop filming an interview with Powell that ran a few minutes over schedule. Powell scolded her during the interview and continued with Russert. (This was called a scandal to liberals.) She also had lashed out at a Post Reporter in 2001 who was writing a profile on her then boss, Tom Delay.

Lobbyist Jack Abramoff pleaded guilty to three felony counts in Washington on Tuesday as part of a settlement with federal prosecutors.

Participants in the case, who spoke on condition of anonymity because of the sensitivity of the investigation, said Mr. Abramoff had provided a full picture of what evidence he could offer against other suspects.

Like Michelle Malkin, Glenn Reynolds and the “other GP”, I am with the White House on this… “it is unacceptable and outrageous.”