A day after elections, Hamas and Fatah exchange gunfire in Gaza,
VIDEO HERE

They’re packing heat and torching cars within the walls of Parliament.
Is this it for Arafatistan?

In Gaza this is a protest, in France this is unrest, in LA this is rioting. 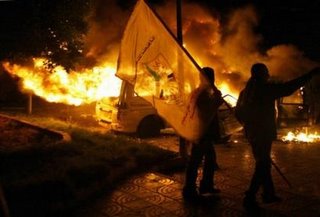 A protestor holds a Fatah flag next to a burning car inside the courtyard of the Parliament in Gaza City Friday Jan. 27, 2006. Thousands of members of Fatah, which badly lost Palestinian parliament elections to Hamas this week, burned cars and shot in the air in demonstrations across the Gaza Strip, demanding the resignation of corrupt officials and insisting that Fatah form no coalition with Hamas. (AP Photo/Hatem Moussa)

Three people were wounded as Hamas and Fatah exchanged fire in the Gaza Strip today. The punch up became a shoot out:

Three people were wounded in a clash between supporters of radical Islamist faction Hamas and the ruling Fatah party in the southern Gaza Strip, a Palestinian security source said.

The three were taken to hospital after the incident in the town of Khan Yunis, the source added. It was not immediately clear whether they were supporters of Hamas or Fatah, or bystanders.

Witnesses said a brawl broke out between rival supporters of the two parties outside a Khan Yunis mosque following the main Friday prayers and the punch-up disintegrated into a shootout.

Hamas supporters at the mosque were apparently disgruntled with a sermon from the imam, whom they branded a Fatah man.

The incident came one day after Hamas won a stunning election victory, decisively ending Fatah’s decade-long grip on power in only the second-ever such ballot in the Palestinian territories.

Cars were burned inside the Parliament courtyard by disgruntled Fatah members. 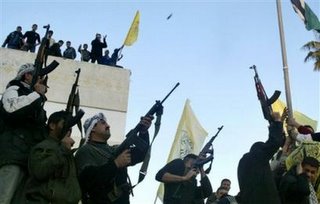 Palestinian Fatah members shoot in the air as they stand at the Parliament building during a demonstration against the Fatah leadership in Gaza City Friday Jan. 27, 2006. (AP Photo/Hatem Moussa)

The proud mother of three suicide bombers won a seat in parliament for Hamas. She was one of the most popular Hamas candidates and is said to be able to work a crowd like a veteran politician. Charles Johnson shared this news. 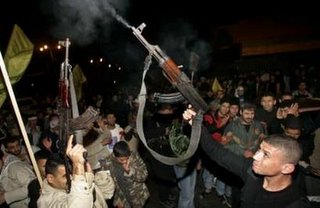 Treppenwitz, an Israeli blogger weighs in on the elections from yesterday:

1. I had come to believe that the overwhelming majority of Palestinians did not support armed conflict with Israel, terror attacks against Israelis or the goal of destroying Israel.

2. I had believed the data I’d read indicating that the Palestinian population supported the secularization of their society and did not embrace the fundamentalist Islam position concerning Israel and non-Muslims.

3. I had attributed support for, and the actual participation in, the terrorism/violence to a tiny sub-set of the Palestinian people.

I am devastated to have been proven so utterly and completely wrong about all three of these basic assumptions.

(via Pajamas)
An Unsealed Room is another Israeli blogger with reactions to yesterday’s polls.