Check out the Updates on the Impeach Blanco websites!

Web traffic at Recall Blanco led to the decision to petition for recall.

Much of the information from a similar site, Impeach Kathleen Blanco, looks like it was taken from blogs. But, there have been “fake impeach Blanco websites” put up, so pay attention! 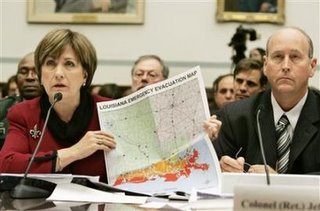 After her unpopular handling of the Katrina disaster in 2005, papers were filed on Tuesday to recall Democratic Louisiana Governor Blanco :

A Republican who says she has never worked on a political campaign filed documents Tuesday launching a drive to oust Gov. Kathleen Blanco, who was harshly criticized for her response to hurricanes Katrina and Rita.

“What we have seen in the past few months is a lack of leadership, a lack of communication, a lack of understanding of how to get things done,” Landry said.

In Louisiana, getting a recall on the ballot requires petition signatures from at least one-third of the state’s registered voters, or about 900,000 people, in 180 days, according to Jennifer Marusak of the secretary of state’s office.

The 180-day period for gathering signatures began Tuesday, when the petition was filed, Marusak said.

Landry said she’s received a tremendous amount of traffic on a recall website she set up, and noted 676,000 people voted against Blanco for governor in the first place. Blanco was elected in 2003 with 52% of the vote; the number cited by Landry was the total who voted for her opponent, Bobby Jindal.

** Here is the instruction and petition download page. Print out on legal paper only. **

Update: “If the proper signatures are gathered, a majority of voters in a recall election would have to vote to get rid of Blanco, a Democrat, before she would be forced out of office.”

Update 2: (6:00 PM CST) If you plan on signing the petition make sure you sign the right petition. There may be some fraudulent forms going around!!

For those who prefer the instant gratification of the Internet, protest sites began to spring up before the floodwaters in New Orleans had begun to recede.

Among the best known are the dueling “Impeach Blanco” sites — one of which is actually pro-Blanco.

It began Sept. 2, when the Internet domain www.impeachblanco.com was purchased and registered to a Polly Stewart of Lake Charles, La. On Sept. 10, the conservative blog Wizbang took note of the sale and speculated that Stewart — who they identified as a sometime Democratic activist — bought up the name to prevent Blanco critics from using it to launch an attack on the governor. (Here is the scoop from Wizbang posted in September and Bizzyblog heard from Polly Stewart, herself!)

That same day, the domain names www.impeachblanco.org and www.impeachblanco.net were snapped up and registered through a Dover, Del., corporation, InTouch Communications. The site operator, who identifies himself as Chuck DeWitt, posted a blistering critique of the governor’s handling of the crisis, along with links to news stories and video and an online “recall petition” — which would do little good in an actual petition drive, since state law requires handwritten signatures on recall petitions.

“Kathleen Blanco, the Governor of Louisiana is completely responsible for our state’s lack of preparedness and for mishandling the rescue and relief operations in the aftermath of Hurricane Katrina,” DeWitt’s Web site begins.

If you do sign, make sure you sign the correct form. Signing an internet petition will not count!