Hamas backers celebrate with (what else?) guns! 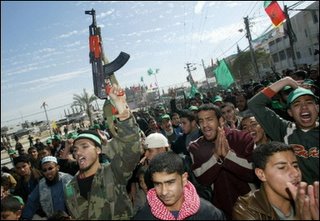 So, what are the odds that a terrorist group will discontinue the use of violence just because they won an election that will put them in power?

Palestinian Prime Minister Ahmed Qurei has announced his resignation, saying Hamas must form the next government following the parliamentary elections.
It comes as the militant Islamic group appeared to be heading for a shock win.

With counting still under way, officials from the ruling Fatah party said Hamas had won a majority. Official results are due at 1900 (1700 GMT).

Israel, the US and the EU consider Hamas a terrorist group and have said they do not want to deal with it.

Mr Qurei has gone to see Palestinian leader Mahmoud Abbas to hand in his formal resignation.

The US and EU say they will not deal with Hamas. 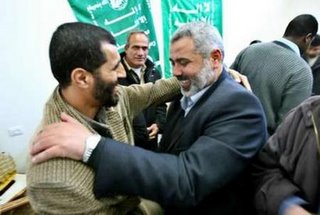 Jimmy Carter has hope for Hamas.
Freedom for Egyptians has thoughts.
Sister Toldjah says this is good news for the Let’s-blow-up-Israelis crowd.
All Things Beautiful has a disturbing photo collection.
Always intelligent and thought provoking, Publius Pundit is following the story.
Pajamas Media has much more.