The story today in the Washington Post is that US military deaths in Iraq nearly matched the year before.

844 brave men and women from the US were lost in Iraq in 2005, 848 were lost in 2004.
These statistics were taken from Iraqi Coalition Casualty Count.

As Glenn Reynolds wrote this morning, 2005 was a “decidedly mixed year”. Unfortunately, the media hid half of the mix. This made the mixed year seem like one big disaster of which there were many. From today’s headlines, it doesn’t look like the media is planning on changing that practice anytime too soon. 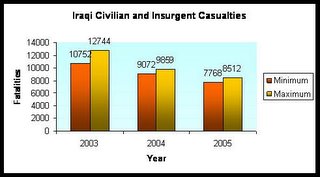 The recorded Iraqi civilian fatalities (including insurgents, military, morgue counts, police, etc.) were down 16% (16% maximum) this year… 38% (48% maximum) less than 2003. If you take out the numbers from that horrible day in August when nearly one thousand panicked Iraqis were trampled or drowned near a Muslim shrine, the year shows striking progress compared to 2003 and 2004 with fatalities one third less than in 2004.

This chart shows daily spikes of violence in Iraq.

Each spike is a day that saw a large number of Iraqi fatalities. The days of massive death counts decreased significantly in 2005.

Finally, here is something you won’t hear reported in the mainstream mix… Here is the body count since the War in Iraq began in 2003 compared to when Saddam was waging his own war on the Iraqi people.: 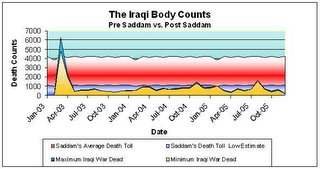 The yellow area shows estimated total fatalities since the beginning of the War in Iraq from Iraq Body Count, an antiwar website. Less Iraqis are dying today in war than they were when the Butcher of Baghdad’s bloody reign of terror.

The body counts are very sad to look at, yet the complete picture is much different than the media’s mix.

Previously:
Charting the Iraq War
Media Blackout on Iraqi Body Counts
A Look at How War in Iraq is Preserving Life

Mind in the Qatar makes a good point.