The ACLU partners up with the New York Times for attack ad #2 today. 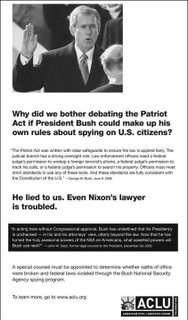 Here is the nice spread from the New York Times that accuses the president of lying (again).

The ad is vague in its attack on Bush, but is clear in comparing Bush to the most scandalous criminal in history besides Hitler, Richard Nixon:

“President Bush has lied to the American public while secretly authorizing government agents to run roughshod over our civil liberties,” said ACLU Executive Director Anthony D. Romero. “The president’s own actions make it clear that we need additional checks on broad federal powers that threaten the freedom of innocent Americans.”

The new ACLU ad quotes President Bush discussing the Patriot Act on June 9, 2005, stating that law enforcement officers need a federal judge’s permission to engage in electronic surveillance of a suspected terrorist. But, in light of the president’s repeated NSA authorizations, the ad asks, “Why did we bother debating the Patriot Act if President Bush could make up his own rules about spying on U.S. citizens?”

The current ad highlights the concerns of John W. Dean, former legal counsel to Nixon: “In acting here without Congressional approval, Bush has underlined that his Presidency is unchecked — in his and his attorneys’ view, utterly beyond the law. Now that he has turned the truly awesome powers of the NSA on Americans, what asserted powers will Bush use next?”

Just this week, in an unclassified document released by House Minority Leader, Nancy Pelosi, NSA said they acted on their own without presidential authority after 9-11, when 3,000 Americans were blasted out of the New York skyline, in protecting Americans in an article in the New York Times itself on Wednesday, January 4, 2005:

The National Security Agency acted on its own authority, without a formal directive from President Bush, to expand its domestic surveillance operations in the weeks after the Sept. 11 attacks, according to declassified documents released Tuesday.

The N.S.A. operation prompted questions from a leading Democrat, Representative Nancy Pelosi of California, who said in an Oct. 11, 2001, letter to a top intelligence official that she was concerned about the agency’s legal authority to expand its domestic operations, the documents showed.

Another thing this ad doesn’t tell you is that John W. Dean, former legal counsel to Nixon has been bashing George Bush for years now and even wrote a Bush bashing book “Worse than Watergate” that was published in April 2005. So, it is not like this is the first time that the the former legal counsel has gone out on a limb against President Bush, and it surely won’t be the last.

Obviously, there is much more to this. There are many who claim what the president did was legal. A majority of Americans support warrentless eavesdropping. But, the ACLU has its agenda so don’t be surprised with their continual attacks on national security.

Stop the ACLU has more reaction to the newest attack ad on the president.