Check out this historic concert! It’s a cool sound.

Where once death was performed, today there is music. 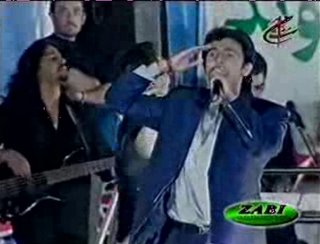 Bollywood star Sonu Nigam salutes the Afghanistan crowd as he opens his show at the Kabul stadium in July of last year. (United Afghan.com)

Several thousand fans packed the Kabul stadium where the Taleban used to carry out amputations and executions of those guilty of criminal offences:

Around 10,000 fans from all over Afghanistan had arrived at the stadium by 1700 local time on Wednesday, four hours before the musicians arrived.

Correspondents say that the crowed cheered when the musicians appeared on the stage despite the delay. The excitement with which the Indian musicians were received was unprecedented.

“We Indians like Afghans”, he said at the beginning of the concert. “It is the news of insecurity in Afghanistan that prevents Indians from visiting. But on my return, I will tell Indians that Afghanistan is secure and we can feel safe amongst Afghans.”

If you watch the concert linked to here, notice the lack of women in the audience and on stage dancing. It soesn’t seem to bother the concert goers. 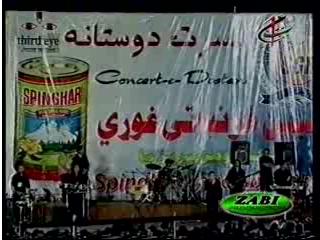 At the end of Sonu Nigam’s concert, the first major concert by a foreign musician in the Afghan capital, the overloaded stage collapsed.

This weekend, 1,500 male fans squeezed into hall to see Tajik singer Maniza Daulat perform. Maniza is the first female singer in more than a decade to entertain Afghans in a series of concerts this week:

The sultry Tajik star tested the audience in this deeply conservative Islamic country by kicking off with a slow song about her father for which she wore a long black robe and head scarf and barely moved.

Encouraged by the positive response, she changed into tight, Western-style jeans and uncovered her hair — still rare among Afghan women in public — for more up-tempo numbers which also had her dancing across the stage.

The concert was the first in a series planned for the capital and the northern city of Mazar-i-Sharif that many said showed Afghanistan was moving away from the its fundamentalist past, which included five years of Taliban rule.

“It is great to be here,” 42-year-old electrical engineer Sediq Saleh told AFP. “It brings me hope that we are stepping back towards normal after long years of tyranny and war.

“This concert reminds me of the old days when Tajik bands would come to Afghanistan to play and strengthen the cultural bonds between two Islamic countries who speak the same language,” he said. 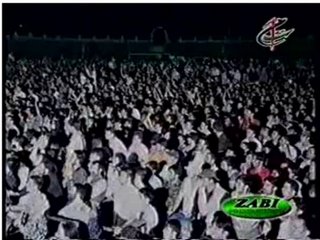 In 2004, 30,000 Afghan men and women packed the Kabul stadium to hear the traditional Afghan music of exile, Farhud Darya, who had returned to Afghanistan after he fled to Europe during the Taliban years.

The Taliban regime, ousted by the US-led campaign in 2001, also declared singing a sin. It denied women the right to education and work; music and televisions were banned.