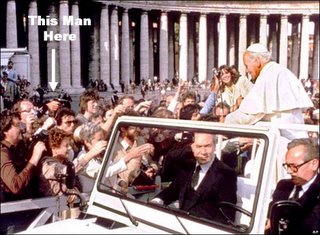 Aehmet Ali Agca will leave his cell in Turkey this week a free man:

Agca, who will be freed from prison in his native Turkey this week, has only fueled conspiracy theories with his inconsistent and at times contradictory remarks about the May 13, 1981, shooting in Rome’s St. Peter’s Square.

Minutes after his arrest, Agca declared he had acted alone. But within days, police believed someone had given him money and other support.

In an interview last year with the Italian daily newspaper La Repubblica, Agca made contradictory remarks about his attempt on John Paul’s life. He initially said Vatican prelates helped him carry out the shooting, adding: “The devil is within the Vatican.”

He then reportedly said in the same interview that “nobody in the world knew of my attempt.”

John Paul himself never directly said who he thought was behind the attack, but in his book, “Memory and Identity: Conversations Between Millenniums,” the late pontiff wrote that Agca had been maneuvered by another party.

“Ali Agca, as everyone says, is a professional assassin. The shooting was not his initiative, someone else planned it, someone else commissioned him,” the pope wrote.

The pope called the attack “one of the last convulsions of the 20th Century ideologies of force,” which he said included communism.

Mr. Agca, who also killed a journalist in 1978, was released by Italy to Turkey in 2000 to serve out the remainder of his life sentence.