That may be the reason why I get so upset when I see shameless angry comments as this holiday draws near meant for political gain (see Code Pink’s MLK Peace Salute).

Isn’t it strange that this holiday, that could be a great occasion to unite our great country, can separate us more than any other American Holiday? And, this is not because Dr. Martin Luther King Jr., but because with each year we hear more speeches “against” a group, person, or idea, than “for” all of us. But, here is Dr. Martin Luther King’s dream:

I have a dream that one day this nation will rise up and live out the true meaning of its creed: “We hold these truths to be self-evident, that all men are created equal.”

I have a dream that my four little children will one day live in a nation where they will not be judged by the color of their skin but by the content of their character.

I have a dream today!

This is not a dream owned by just blacks, or just liberals, or just the poor, or the abused. This is a dream for All of America. Everyone owns a piece of this dream!

It is not right of one party to claim this dream! It is selfish!

This is not what Dr. Martin Luther King wanted. Those ideas were not taken from his “I Have a Dream” speech.

As you hear words this weekend where you feel shut out of the discussion (Al Gore’s impeachment talk on Monday) remember these truths.

They won’t be repeated often enough. 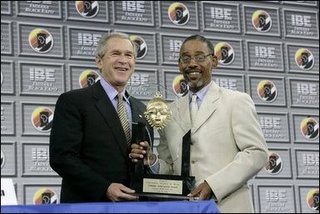 * The Bush Administration has increased spending on elementary and secondary education by 41 percent.

* Minority students are also making progress at a faster rate, so the achievement gap is narrowing. According to NAEP, African-American and Hispanic fourth graders set records in both reading and math scores. Eighth grade Hispanic and African-American students achieved the highest math scores ever. (January 2006)

* African-American Business Ownership Is At An All Time High.

* The Administration is working to give minority-owned businesses better access to compete for Federal contracts, and has provided $8 billion in New Market Tax credits to boost investment and community development in low-income areas.

* Nearly Half Of All African-Americans Now Own Their Own Home. The minority home ownership rate rose a record 51.6 percent during the first quarter of 2005, as 15.7 ethnic minorities claimed ownership of the roof over their heads, according to the U.S. Census Bureau.

* The Bush Administration has awarded $2 billion in competitive grants to faith-based institutions that are working to transform minority neighborhoods with faith and compassion.

* The Bush Administration partnered with the National Urban League in a new initiative to expand business ownership and entrepreneurship among minorities July, 2004.

* 50 million Iraqis and Afghanis now live in freedom because of the War on Terror – and millions across the broader Middle East are claiming their liberty as well.

* Because of the US and Allies action, there are significantly less people dying daily in Iraq today than when Saddam was in power.

* Hurricane Katrina was not a racist disaster, not hardly.

* George Bush has put more blacks in prominent positions than any other president in US history.

* The President’s Emergency Plan For AIDS Relief. PEPFAR, the largest international health initiative dedicated to a single disease in history, is providing historic levels of support to the fight against the AIDS pandemic.

* And, of course there are the other black history moments that the democrats won’t share with you this weekend including the Twenty-Five Historically Significant Black Experiences.