Gallery 5, seat 7, row A is empty tonight. Cindy was arrested before the SOTU Address. 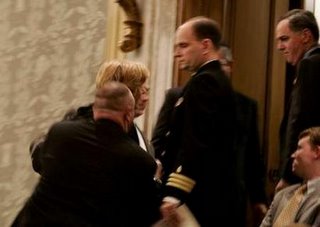 Anti-war protester Cindy Sheehan (L, blonde hair), whose son was killed serving as a U.S. serviceman in Iraq, is rushed out of the U.S. House of Representatives chamber by security personnel after arriving for the State of the Union address by U.S. President George W. Bush on Capitol Hill in Washington January 31, 2006. There were unconfirmed reports that Sheehan had been arrested. (REUTERS/Jason Reed)

The Anti-War Representative Woolsey spoke out against the War in Iraq,
VIDEO HERE 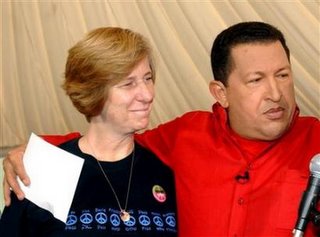 Cindy Sheehan may be in the audience tonight at the SOTU Address. Democrat Representative Lynn Woolsey gave Cindy her pass:

Cindy Sheehan said she will be part of the live audience during the president’s State of the Union speech to congress Tuesday.

Bay Area Congresswoman Lynn Woosley gave anti-war activist a gallery pass late Tuesday, just hours before the planned State of the Union speech. Sheehan was in Washington to protest the president during his national address, but then came word she was invited to see the speech live.

A spokesman for Sheehan says she decided to accept the invitation two hours prior to the speech. The spokesman also said that Sheehan will be respectful and listen to the address because she is a guest of a member of congress.

Last night Cindy spoke at an area coffee house in Washington after returning from Venezuela. Cindy left the audience with this…

She said this: We should also be talking about the immediate withdrawal of our troops from Iraq. We need to focus on that, too. We can’t wait until [the] 2006 [elections]. We have to go out and demand that Congress do its job…We’re using depleted uranium in Iraq…We’re torturing people. We’re flying them [around] in airplanes to torture them… We should be talking about morality. Killing to serve any purpose is barbaric. It’s wrong. It’s immoral. The invasion and occupation of Iraq doesn’t fit any standards of the just war theories…We’ve seen some good stuff happening [on Capitol Hill.] We’ve seen Rep. Jack Murtha (D-PA) turn around. But, the Congress isn’t going to change, unless we make them.

Lorie Byrd is torn with the idea that Cindy may be sitting in the audience.

And,… It’s still not too late to encourage Cindy to make a run for Democratic Senator of California.

Breaking Update: (8:00 PM CST) Cindy was escorted out of the gallery before the address started tonight. She was trying to unfold a banner. She is being detained.

If democrats seem sour tonight, HERE is one reason.

Update 3: (Wednesday AM) Cindy is released from the slammer and talks with reporters.