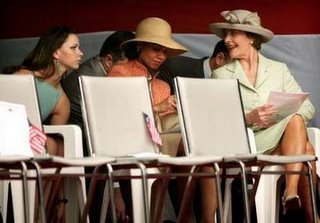 .S. First Lady Laura Bush (R) talks to her daughter Barbara (L) and U.S. Secretary of State Condoleezza Rice during the inauguration ceremony of new Liberian President Ellen Johnson-Sirleaf at the Capitol Building in Monrovia January 16, 2006. Johnson-Sirleaf took office as Africa’s first elected woman president on Monday, backed by a strong show of U.S. support and vowing to fight graft and rebuild her country after years of war. (REUTERS/Jason Reed)

Laura Bush says Condi is her choice for president in ’08:

Laura Bush has revealed for the first time whom she would like to see replacing her husband in the White House: Condoleezza Rice, the Secretary of State.

“I’d love to see her run. She’s terrific,” Mrs Bush said during an interview in which she predicted that for the first time a woman would soon be elected president of the US.

“I think it will happen, for sure,” she told the television network CNN. “I think it will happen probably in the next few terms of the presidency in the United States.” She said her choice for that ground-breaking role would be “of course, a Republican woman” and then gave her endorsement to Dr Rice.

Condi says “thanks but no thanks”:

“Obviously, it’s flattering when people say things like that. The first lady is not only a terrific person, she’s my friend. And I was honored that she said that, of course. She’s a wonderful person,” Rice said.

How about vice president?

“The two are the same,” she said with a grin and a shake of her head.

During her flight Sunday, Mrs. Bush was asked whether she’d heard from Rice after her remark.

“I’m probably going to have to take over her correspondence department, when she gets all the letters,” Mrs. Bush joked.