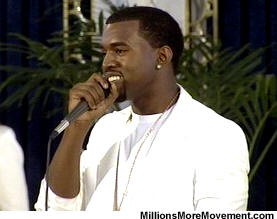 Here is a part of his acceptance speech:

Kanye West: (at 6:00 mark) And, it’s interesting that we just had a meeting in the office and it was brought up about, and its funny that I brought up in a song about, you know the government administers AIDS. I think the figure I learned when I was at Live 8 was that there was over 6,000 people in Africa dying everyday from AIDS.

But, I said the government administers the AIDS.

This is the whole thing. If you’ve got something that you want to get to, and there’s a people that are strong people, a people that are warriors, in order to get to their resources you’ve got to weaken them. What else has the strongest people you know in more of a fetal position than the AIDS epidemic?

And, then you hear about this. I say in another song, I said, you know the best medicine goes to people that’s paid. If Magic Johnson got a cure for AIDS and all the broke mothers passed away. So that means a cure for AIDS. So who has a cure?

So a lot of these things, I don’t even set out… Really, I’m an entertainer. That’s one of the reasons why I think God let me live. But, there must have been a deal made when He spared my life in an accident. He said at any given moment I’m gonna just use you. I’m gonna speak through you at any given moment and you gotta just run with it…

Jim Hoft
Jim Hoft is the founder and editor of The Gateway Pundit, one of the top conservative news outlets in America. Jim was awarded the Reed Irvine Accuracy in Media Award in 2013 and is the proud recipient of the Breitbart Award for Excellence in Online Journalism from the Americans for Prosperity Foundation in May 2016.
Smoking Gun Emails Reveal How Milwaukee Shared Government Election Data with Far Left Groups - Prove Existence of Massive Ballot Harvesting Operation --WITH UPDATE
Ohio GOP Censures Never-Trump Lawmaker for Voting to Impeach President Trump - Then Party Calls for Him to Resign
Newsmax Host Emerald Robinson ABSOLUTELY KILLS IT! Grills Dumbfounded Psaki on Joe Biden's Light Schedule then Turns to Dr. Fauci's Suspicious Funding of Wuhan Lab
HISTORY MADE: The Democrat-BLM War on Police and War on Civil Society Resulted in 25% More US Homicides in 2020 -- HERE ARE THE RESULTS
Missouri House Approves Annual "Rush Limbaugh Day" to Honor Medal of Freedom Winner
See more...