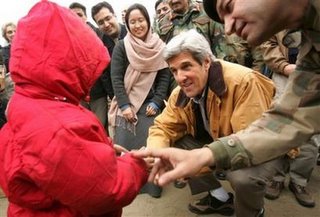 John Kerry never sounded so good than he did on Sunday during his meeting with Pakistani President General Pervez Musharraf. John Kerry praised the efforts of Pakistan and its assistance to the US in the War on Terror. It made Senator Kerry sound rather “Bush-ish” which is a good look for the Massachusetts Senator and Vietnam swift boat veteran:

Senator John Kerry praised Pakistan role in war against terrorism saying that due to courageous steps taken by Pakistan, the US had succeeded to great extent in stamping out menace of terrorism.

He lauded the efforts made by President General Pervez Musharraf to combat scourges of terrorism and extremism. He also reiterated US commitment to continue to support Pakistan. He also praised the prudent policies being pursued by government of Pakistan in bringing improvement in the country’s economy.

Both sides reaffirmed their resolve to continue to cooperate each other on permanent basis in war against terrorism.

Senator John Kerry described the efforts being made by Pakistan and India for establishment of peace in South Asia as reassuring and stressed both the countries should continue with CBMs so that the way could be paved for settlement of all outstanding problems.

US senator expressed profound shock and grief over unprecedented loss of lives and property caused in October 8 killer quake and reiterated US resolve to continue cooperation with Pakistan in its efforts for rehabilitation of quake affected people.

The way Pakistan had faced this calamity with perseverance is highly appreciable, he added.

Kerry even stressed the importance of a democratic Pakistan in meetings on Saturday:

U.S. Senator and a former Democratic Presidential candidate, John Kerry, has said for a U.S.-India like civilian nuclear cooperation deal, Pakistan would have to move towards democracy and demonstrate commitment to non-proliferation.

This was of course different than his stance in May, 2004, when John Kerry said a democratic Pakistan took a back seat:

Sen. John F. Kerry indicated that as president he would play down the promotion of democracy as a leading goal in dealing with Pakistan, Saudi Arabia, Egypt, China and Russia, instead focusing on other objectives that he said are more central to the United States’ security.

And, this was different than what his campaign website said in 2004 about speeding up efforts for democracy in the region:

Democracy will not take root overnight, but America should speed that day with a strategy that aims at breaking down the economic and cultural isolation of much of his region, and supports local efforts to promote democracy, trade, tolerance, and respect for human rights.

It was a great picture, anyway. And, he does sound his best when he sounds Bush-ish.