This is very scary…

“I believe we could have done better. I think the United States should have offered the opportunity to provide the nuclear fuel (to Iran), test them, see whether or not they were actually looking for it for peaceful purposes.” 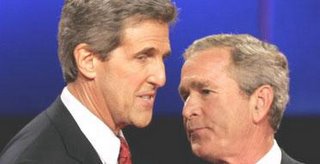 No wonder George Bush was scowling!

BUSH: On Iran, I hope we can do the same thing, continue to work with the world to convince the Iranian mullahs to abandon their nuclear ambitions.

We worked very closely with the foreign ministers of France, Germany and Great Britain, who have been the folks delivering the message to the mullahs that if you expect to be part of the world of nations, get rid of your nuclear programs.

The IAEA is involved. There’s a special protocol recently been passed that allows for inspections.

I hope we can do it. And we’ve got a good strategy.

KERRY: With respect to Iran, the British, French, and Germans were the ones who initiated an effort without the United States, regrettably, to begin to try to move to curb the nuclear possibilities in Iran. I believe we could have done better.

I think the United States should have offered the opportunity to provide the nuclear fuel, test them, see whether or not they were actually looking for it for peaceful purposes. If they weren’t willing to work a deal, then we could have put sanctions together. The president did nothing.

Kerry also did not worry about loosening visa restrictions. “We have to support the idea that someone who is an American citizen has a right to have their family visit them from anywhere in the world,” he told Akbarpour at a Jan. 14, 2004, fund-raiser in San Francisco. The Iranian intelligence ministry (MOIS) has a proven track record of sending intelligence operatives – and even assassins – overseas posing as refugees or legal immigrants.

Iran also has been actively recruiting suicide bombers this past year.

It is comments like this that keep you awake at night thinking, “What if?”

This helps explain the faces George Bush was making that night!

Update: While we’re on JFK,… Katie Macguidwin noticed that he made an appearance on Daily Kos, yesterday.

Ironically, Kerry’s campaign publicly de-linked Daily Kos during the campaign for its infamous “screw them” comment. Blogs for Bush has the details.

Maybe this way he can shy away from them again come election time.