Being a representative from the Heart of Jesusland…
I welcome this news.

Pardon My English offers up Jesusland ’06 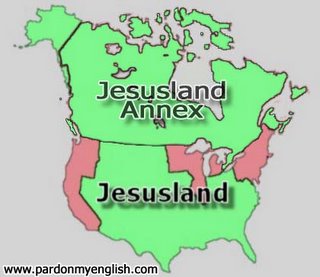 After the fall of the liberal northern paradise, formerly known as the United States of Canada, 10,000 to 20,000 Americans including Alec Baldwin ask, “Where to now?”

I blame it on Captain’s Quarters, Small Dead Animals, Western Standard and Angry in the Great White North.

Al Gore blames it on the right leaning media in Canada… Huh?