“History has weighed heavily on the Middle East. What we have tried to do over the last 30 years, starting with President Carter, moving through other presidents, including my husband, and now this president, is to send a uniquely American message: `It can get better. Just get over it.'” 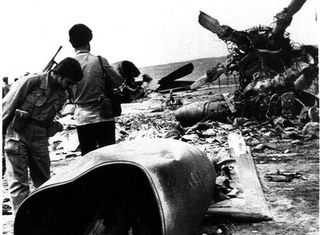 The wreckage from the failed Iranian hostage rescue attempt in 1980. (Hofstra)

The remains of the helicopters belonging to the United States military, used in a failed operation in 1980 to rescue the 52 American hostages in the U.S. embassy in Tehran, are currently on display at the Imam Khomeini Prayer Hall in Tehran.

Is this the foreign policy Hillary was talking about?

Is this what she meant when she said, “Get over it”?

It’s hard to see how President Bush has continued the “Carter Policy” of appeasement in the Middle East. And, I am sure that at least two individuals would agree with me, Saddam Hussein and Mullah Omar! It is insulting that Hillary would clump her husband’s policies in the same bucket as the Bush Doctrine. What were his policies, anyway? Does anyone remember anything about Bill Clinton’s Mideast policy besides the numerous photo ops and Arafat visits to the White House? On the other hand, The Bush Doctrine has done more to bring positive democratic change to the Middle East in the last year than the previous administrations from Carter through Clinton.

If Hillary thinks that George W. Bush and the successes of the Bush Doctrine are an extension of the failed “Carter Policy”, she needs to…