While Fidel Castro was speaking to thousands of obedient Cubans in Havana, the words of Abraham Lincoln were flashing on a screen in the background. 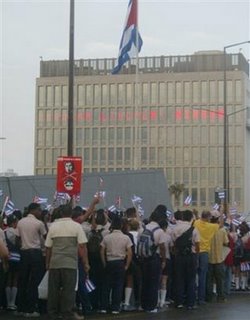 People march as the red luminescent messages are displayed along the fifth floor on the building of the US mission during a march in Havana, Cuba, Tuesday, Jan 24,2006. Fidel Castro directed a protest march past the U.S. mission , leading many thousands of cheering Cubans who carried signs equating U.S. President George W. Bush with Adolf Hitler and accused the United States of preparing to free one of the hemisphere’s worst terrorists. (AP Photo/Jorge Rey)

Babalu Blog has the best story of the New Year!

Before Castro could hold one of his marathon talks, he’d been punked!

The sign was activated as Castro began speaking in front of the building Tuesday morning, relaying global news and quotes including Abraham Lincoln’s: “No man is good enough to govern another man without that other’s consent.”

Castro glanced up at the building, saying, “They already turned on the little sign — the cockroaches are brave,” before starting his speech.

ABC News has video HERE of the new flashing sign on the Havana mission that is creating the stir. ABC doesn’t seem to impressed with the humor here and is more focused on Castro’s distress.