Hamas says that it will not be “blackmailed”
VIDEO HERE

“I think we have to take Hamas at its words and assume that as Islamists, they have some core beliefs that won’t change; that the entire land of Palestine belongs to God and is Muslim holy land.”

Hisham Ahmed, a Political Scientist at Birzeit University in Ramallah and a student of Hamas.

Tension builds in the Palestinian Territories. 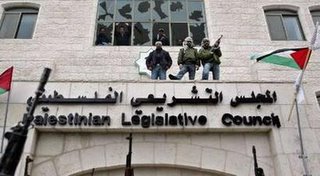 Khaled Meshaal, who lives in exile in Syria, said the force would include its militant wing and would “defend our people against aggression”.

His comments came after foreign powers called for Hamas to renounce violence.

Unrest continues in Gaza and the West Bank, with supporters of the defeated Fatah party staging violent protests.

Some involved clashes with Hamas activists, others were directed at the leadership of Fatah.

Mr Meshaal said in the Syrian capital, Damascus, that Hamas had no plans to disarm.

“As long as we are under occupation then resistance is our right.”

The Palestinians suffer from 60% unemployment. 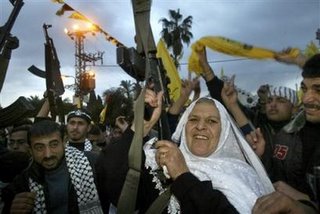 Gunmen and demonstrators from the Fatah party stand on the walls surrounding the parliament building during a demonstration against the Fatah leadership in Gaza City, Saturday, Jan. 28, 2006. Thousands of Fatah activists held protest marches across the West Bank on Saturday, demanding the resignation of their leaders after a stinging election defeat at the hands of the Islamic militant Hamas. In Wednesday’s parliament vote, Hamas captured 76 of 132 seats in the legislature. (AP Photo/Hatem Moussa)

Hamas Leader Khaled Meshal says the terrorist group will not be pressured to change its stance on Israel:

Khaled Meshal, also said Hamas would not “submit to pressure to recognize Israel, because the occupation is illegitimate and we will not abandon our rights,” nor would it disarm, but would work to create a unified Palestinian army.

He insisted that “resistance is a legitimate right that we will practice and protect,” and he defended attacks on Israeli civilians, which included many suicide bombings until a cease-fire nearly a year ago. Then he said Hamas was “ready to work with Europe and even the United States if they wish.”

The Meshal news conference was a good example of the mixture of messages coming from Hamas. Since its victory on Wednesday, an urgent debate has erupted over whether Hamas will be able to modify its positions once in power, disavow violence and terrorism and come to recognize the existence of the state of Israel. Israel, Europe and the United States say they will not have dealings with Hamas until it does so.