Sometimes the message is lost in translation. 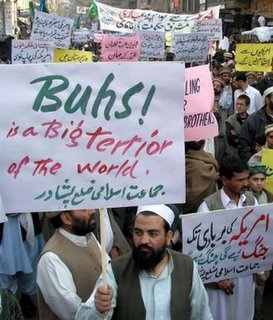 George Bush, Big Terrior, Terrier? … of the world.
Pakistani supporters of Muttahida Majlis-e-Amal (MMA), an alliance of six hardline Islamic parties, hold placards as they protest against the U.S. airstrike on Damadola in Bajaur tribal area during a rally in Peshawar January 20, 2006. An al Qaeda bomb expert with a $5 million bounty on his head and son-in-law of the group’s No.2 were among four militants believed killed by the U.S. airstrike last week, Pakistani intelligence sources said on Thursday. (REUTERS/Ali Imam)