It’s news like this that blows holes in that “Culture of Coruption” theme the democrats are working. 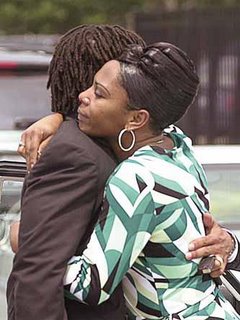 Sheila Thomas on the day she was convicted back on July 1, 2005.

Two local democratic election workers were the first two of nine to be sentenced for scheming to buy votes in the November 2004 elections today:

A former Democratic election worker in this battered city was sentenced Monday to a year and a half in federal prison and a City Hall volunteer got probation for scheming to buy votes in the November 2004 election.

Murphy rejected a prosecutor’s request that Yvette Johnson, 47, get 10 to 16 months in prison and he gave her two years’ probation, including five months of home confinement.

Thomas, Johnson, Ellis and Lewis also were convicted of election fraud for allegedly paying or offering to pay at least one person to vote.

Johnson and Thomas were the first to be sentenced of the nine people who either were convicted or pleaded guilty in the alleged scheme.

State records showed that tens of thousands of dollars were transferred from the county Democrats to the committeemen days before the election.

At least 16 St. Louis area Democrats have been found guilty of election crimes since the 2004 election!

As far as Mr. Ellis, he tried to have a federal witness silenced “permanently” during the investigation. He pleaded guilty for attempted murder of a federal witness in October of last year. He awaits sentencing.