More on the Democratic Culture of Corruption:
A former aide to Democratic Representative William Jefferson pled guilty on Wednesday. He will cooperate with an investigation into an alleged conspiracy to funnel money to the eight-term congressman and members of his family:

Brett Pfeffer, 37, told U.S. District Judge T.S. Ellis III that a congressman, identified in court only as “Representative A,” lobbied high-ranking officials in Nigeria and Ghana to use technology developed by a small U.S.-based telecommunication company and pressed the Export-Import Bank of the United States to approve loan guarantees. In exchange, Pfeffer said, the congressman demanded a share of the new company created to facilitate the deal.

Pfeffer, who pleaded guilty to conspiracy and aiding and abetting the solicitation of bribes, said the congressman also told him that a member of his family had to be put on the company’s payroll.

Representative Jefferson has traveled to Africa over the past two years on economic development missions. 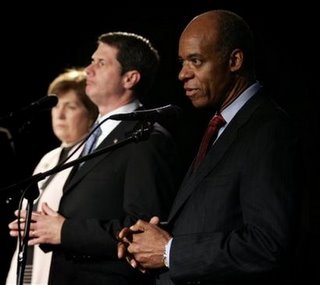 Representative William Jefferson is currently traveling in the Netherlands with other Louisiana politicians. (AP)

Political Teen has the video HERE of Jefferson’s jaunt home during the Katrina disaster.

Five days after Hurricane Katrina, Representative Jefferson was escourted to his home to rescue suitcases and boxes of documents while there were still individuals who needed to be rescued from the Superdome. Jefferson did not tell the guardsmen at the onset of their trip into the city that he intended to stop at his home:

Military sources tells ABC News that Jefferson, an eight-term Democratic congressman, asked the National Guard that night to take him on a tour of the flooded portions of his congressional district. A five-ton military truck and a half dozen military police were dispatched.

Lt. Col. Pete Schneider of the Louisiana National Guard tells ABC News that during the tour, Jefferson asked that the truck take him to his home on Marengo Street, in the affluent uptown neighborhood in his congressional district. According to Schneider, this was not part of Jefferson’s initial request.

The Louisiana National Guard tells ABC News the truck became stuck as it waited for Jefferson to retrieve his belongings.

The soldiers signaled to helicopters in the air for aid. Military sources say a Coast Guard helicopter pilot saw the signal and flew to Jefferson’s home. The chopper was already carrying four rescued New Orleans residents at the time.

After spending approximately 45 minutes with Jefferson, the helicopter went on to rescue three additional New Orleans residents before it ran low on fuel and was forced to end its mission.