Two members of the “Axis of Good”- minus Fidel Castro – met in Venezuela today. Evo Morales took a private jet and bounced down to Caracas via Cuba to see good friend Hugo Chavez. Jesse Jackson got the red carpet treatment when he flew down in Hugo’s private jet in late August. 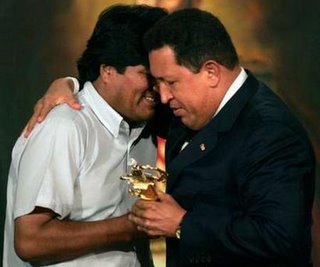 President elect Evo Morales of Bolivia was met with hugs and smiles from his good friend Hugo Chavez as he flew into Caracas today on a private jet:

Bolivian President-elect Evo Morales, fresh from a visit with Fidel Castro, launched a world tour Tuesday by joining with Venezuela’s President Hugo Chavez in a denunciation of free-market economics — a sign of the growing relationship among the three leftist leaders.

Notably, the tour includes stops in Spain, France, Belgium, South Africa, China and Brazil — but not Washington. Morales’ spokesman says he was not invited.

Arriving in Caracas aboard a specially arranged Cuban jetliner, Morales said he and Chavez were uniting in a “fight against neoliberalism and imperialism.”

The Venezuelan leader received him with full military honors as well as hugs and smiles.

Morales wants to push the “successes” of Fidel Castro into Bolivia and beyond:

In praising Castro and Chavez on Tuesday, he clearly established Washington’s fiercest Latin American critics as his models.

“We are here to resolve social problems, economic problems,” Morales said. “This movement is not only in Bolivia; Fidel in Cuba and Hugo in Venezuela are logging triumphs in social movements and leftist policies.”

Chavez referred to the three leftist leaders as “an axis of good” a play on President Bush’s reference to North Korea, Iran and prewar Iraq as the “axis of evil.”

Earlier this year, Hugo Chavez flew Jesse Jackson to Caracas from Chicago on a private jet where Jesse offered support to the Marxist Chavez.