The Dow Jones hit 11,000 today, the highest mark since June 2001. This mark is still below the all time high set in January of 2000, before stock market scandal and the internet bubble burst during the Clinton Presidency:

Many strategists say breaching the 11,000 mark does not signal a new trend for stocks. But they noted that because 11,000 signifies a psychological milestone, the Dow’s climb above that point could boost sentiment.

“Whether it means we go higher, I don’t know, but it certainly helps with average investor psychology,” Hans Olsen, chief investment officer at Bingham Legg Advisers in Boston, said.

Meanwhile, George Soros warned that their is a chance of recesssion in 2007 due to a hard landing from a cooling housing market (and threw in some Bush-Bashing for good measure):

He argued the war on terror that followed the September 11 attacks on the United States in 2001 and the war in Iraq had turned global opinion against the world’s most powerful country.

“The biggest blunder was declaring war against terror. Today, most Americans realize that the Bush administration has led us astray,” he said…

George Soros may still be smarting a bit from his poor investment choice in 2004. 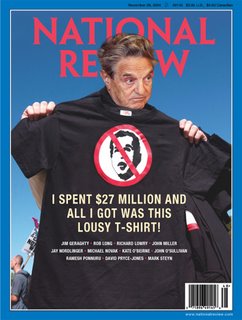 Also today, Abu Musab al-Zarqawi said in a tape posted on a radical Islamist website that attacks against Crusaders would continue until Sharia law was set up in all countries.