** The ACLU calls Bush a Liar in their full page New York Times ad and then omit a critical line from his speech! **

The Roving Wiretap Law HR 3694 that the democrats and ACLU are so upset about was passed by the House in 1998. The ACLU conveniently left the first line of a Bush speech from 2004 off of their full page ad they took out on Thursday in the New York Times about “roving wiretaps”.

The ACLU accuses President Bush of lying yet omit the first sentence of his speech they are quoting from in their ad! Those “eight words” on “roving wiretaps” change the whole meaning to the argument they are trying to make in their advertisement!

Here is what Bush said during his “Remarks by the President in a Conversation on the USA Patriot Act” speech on April 20, 2004, about wiretaps when discussing the Patriot Act (from the White House website):

Secondly, there are such things as roving wiretaps. Now, by the way, any time you hear the United States government talking about wiretap, it requires — a wiretap requires a court order. Nothing has changed, by the way. When we’re talking about chasing down terrorists, we’re talking about getting a court order before we do so. It’s important for our fellow citizens to understand, when you think Patriot Act, constitutional guarantees are in place when it comes to doing what is necessary to protect our homeland, because we value the Constitution. 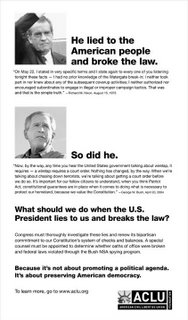 (click to enlarge)
The ACLU put out a full page ad in Thursday’s New York Times where they attack the president as a liar and compare his actions to those of Richard Nixon’s but they cut words from his speech in their full page ad to fit their agenda. This is what their ad said:

After earlier attacks on the Administration by Senator Chuck Schumer on FOX News, Bush later responded to reporters about the leak investigation while at Brooke Army Medical Center where he was visiting wounded troops:

“It’s seems logical to me that if we know there’s a phone number associated with al-Qaida or an al-Qaida affiliate and they’re making phone calls, it makes sense to find out why,” Bush said. “They attacked us before, they’ll attack us again.”

Bush spoke to reporters at Brooke Army Medical Center where he was visiting wounded troops. He said the leak of information about the secret order to eavesdrop on Americans with suspected ties to terrorists causes “great harm to the nation.”

Asked how he responds to Americans worried about violations of their privacy, he responded, “If somebody from al-Qaida is calling you, we’d like to know why.”

The president was asked whether he misled the American people in 2004 when, during an event promoting the Patriot Act, he said that any wiretapping required a court order and that nothing had changed. He made the statement more than two years after he approved the NSA program.

“I was talking about roving wiretaps, I believe, involving the Patriot Act,” Bush said. “This is different from the NSA program.”

The Roving Wiretap law was passed in 1998. The Patriot Act authorizes court-supervised wiretaps. The secretive NSA has separate rules on wiretapping.

California Conservative has its own idea for an advertisement campaign.

Another Rovian Conspiracy investigates how to obstruct the NSA for fun and profit.