Cindy Sheehan today declared at the World Social Forum in Venezuela that:

Cindy Sheehan was able to get a few licks in on President Bush today including calling him the world’s biggest terrorist. She joined Marxist demostrators at a press conference in Caracas, Venezuela at the World Social Forum. 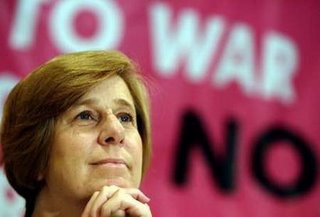 U.S. anti-war activist Cindy Sheehan attends a news conference during the annual World Social Forum in Caracas, Venezuela January 25, 2006. Tens of thousands of international activists gathered for the World Social Forum to protest against U.S. imperialism and debate topics from fair trade to indigenous rights. The sixth world forum, an event that began in Port Alegre in Brazil, has registered more than 67,000 participants and starts with a march against imperialism and war that will likely focus on U.S. George W. Bush and the conflict in Iraq. (REUTERS/Jorge Silva)

Cindy Sheehan continued her attacks on President Bush in Caracas on Wednesday to the delight of the anti-Bush crowd:

“I am against any military invasion of Venezuela. I expect my government to cease meddling in the internal affairs of foreign countries,” the US activist commented during an interview with official TV channel Venezolana de Televisión (VTV.)

Sheehan accused US President George W. Bush of “terrorism against the world” and advocated turning “Washington militarist economy into a peaceful one.”

“Bush continues saying that the (Iraq) war is against terrorism. As a matter of fact, he makes terrorism against the world,” Sheehan said during a press conference on the occasion of the Sixth World Social Forum held in Caracas.

Newsbusters notes what’s not being reported today in the American news.

CNN, via the AP, fails to mention the Marxist flavor of the protest until the last paragraph:

“Other participants sang a communist hymn with fists raised while holding a special tribute to Salvadoran leftist leader Shafik Handal, a guerrilla commander who fought U.S.-backed troops during the country’s 12-year civil war. Handal died of a heart attack on Tuesday at age 75.”