This photo of a suicide bus bombing in August 2005, did not make the papers in China but was splashed across the internet a short time after the blast. 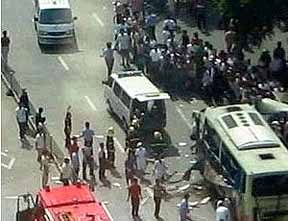 On Monday, August 8, 2005, at 2:32pm, there was an explosion on a bus in the city of Fuzhou. Authorities said that a suicide bomber set off this bomb that killed 11.

This week, a Chinese farmer upset about a property ruling by the local court killed five people when he set off a bomb in a meeting room on Friday, January 6, 2005:

The explosion Friday in Minle County in the northwestern province of Gansu killed the president of the county court and a local Communist Party official, the official Xinhua News Agency said.

The bomber was identified as Qian Wenzhao, 62, a farmer who Xinhua said was angry over a ruling in a property dispute involving the house of his late son and daughter-in-law.

Qian forced his way into a meeting room on the courthouse’s fourth floor and ignited explosives, Xinhua said.

Qian was upset over the loss of his son and his son’s property:

In May 2005, the Minle court sent officers to detain the son in Xinjiang, west of Gansu province. On the way back he killed himself.

In November, the Minle court paid Qian 98,000 yuan for the loss of his son, and Qian said he was “satisfied,” Xinhua reported.

But later Qian demanded the court also address his demands for his son’s property in Xinjiang, as well as the house of the son’s ex-wife, who had died in October.

There have been several bombings in China recently:

Discontented or disturbed attackers in China have used mining explosives or fertilizer devices in previous bombings.

In August, a farmer with lung cancer set off a bomb on a bus in Fuzhou in southeastern Fujian province, wounding 31 people, and in July a murder suspect set off a bomb in a shopping mall in northeastern China, injuring 47 people.

A man set off a bomb on a bus in the western Xinjiang region in January 2005, killing 11 people.

On Saturday, Xinhua reported an explosion in a coal mine in Xinjiang in November was set off deliberately in the Beitaishan Coal Mine, killing 11 people.