After more than 50 homicide attacks on Israel since 2000, Jimmy really needs to define “act responsibly”. 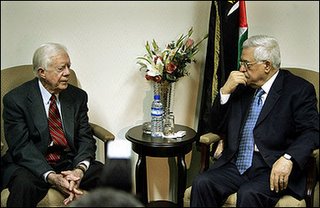 Jimmy Carter urged the world community to give to the Palestinians. Jimmy also asked the terrorist organization Hamas to “Act Responsibly”

“The Palestinian Government is destitute, and in desperate financial straits. I hope that support for the new government will be forthcoming,” Carter said at a Jerusalem press conference.

He added that if international law barred donor countries from directly funding a Hamas-led government than the US and the EU should bypass the Palestinian Authority and provide the “much-needed” money to the Palestinians via non-governmental channels such as UN agencies.

Hamas, the largest and most powerful of the Palestinian terror organizations, which advocates Israel’s destruction, has carried out scores of bombings over the last five years of Palestinian violence, attacks which have killed hundreds of Israeli civilians.

Carter, who has long supported the participation of Hamas in the Palestinian elections, voiced the hope that the Islamic terror group would act “responsibly” now that it had won the elections.

Well, at least he didn’t let a dictator steal this election.

Turnout was high in today’s election:

Voter turnout in the historic balloting was 77.7 percent of 1.3 million eligible voters, the Central Election Commission said. In the 1996 parliamentary election, turnout was about 75 percent.

Daniel Holt at Publius Pundit sees things this way…
Probably better to deal with straight-up terrorists than with terrorists who are widely considered to be peace-seeking politicians.

Jeff Goldstein has thoughts on the new Hamas Charter.
Light Seeking Light has pictures of the Hamas democracy babes packing heat.
John Stephenson has more on Jimmy’s call to the world.