Bush had a heart to heart with over a dozen former Secretaries of State and Defense at the White House today. After an update on the situation and a few comments from the former department heads, President Bush took some terrific photos with the group and dismissed the meeting in time for an early lunch. 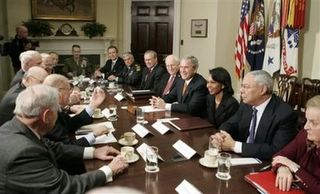 President Bush, right center, is flanked by Vice President Dick Cheney, left, and Secretary of State Condoleezza Rice, right, as he meets, Thursday, Jan. 5, 2006, with present and former Secretaries of State and Defense in the Roosevelt Room at the White House. Bush is pressing ahead with a public relations offensive on Iraq, bringing a bipartisan group of former secretaries to the White House for give-and-take on the unpopular military mission. (AP Photo/Evan Vucci)

George Bush pulled off a grand photo-op today in the White House where he gathered several former secretaries together for a meeting on Iraq. It was a great opportunity for the president to really brain storm on Iraq and yet he was still able to wrap things up promptly at 10:30 AM:

The president invited more than a dozen foreign policy leaders from previous administrations, split nearly evenly between Democrat and Republican, to the White House for a detailed briefing on Iraq. The update was given by Gen. George Casey, the top American commander in Iraq, and Zalmay Khalilzad, the U.S. ambassador in Baghdad, along with current Secretary of State Condoleezza Rice and Defense Secretary Donald H. Rumsfeld.

The White House’s hope was that the prominent figures — many of whom have publicly opposed Bush on Iraq — would be persuaded by the president’s argument that he has what he called a “dual-track strategy for victory,” and they would then spread the word.

With the White House sometimes criticized for taking in too few outside opinions, however, the session wasn’t designed for administration officials to do all the talking. In his brief remarks to reporters afterward, Bush emphasized the portion of the meeting in which the former secretaries offered “their concerns, their suggestions about the way forward.”

Bush offered no evidence he plans any significant changes in strategy.

One of the president’s more vocal critics, former U.S. Secretary of State Madeleine K. Albright from the Clinton Administration, criticized President Bush in April of last year saying the war in Iraq was unnecessary.

However, in a 1998 town hall meeting Albright said:

Iraq is a long way from Ohio, but what happens there matters a great deal here. For the risks that the leaders of a rogue state will use nuclear, chemical or biological weapons against us or our allies is the greatest security threat we face. And it is a threat against which we must, and will, stand firm.

The United States is prepared to use “substantial” force against Iraq if diplomatic efforts fail to resolve the crisis over U.N. weapons inspections.

The media appears to have liked the meeting today anyway, with over 212 articles published on the get together by early afternoon and most of the reporting generally favorable, or at least not rabid, towards Bush.