A citizens tribunal hand delivered indictments to the White House today at 1:30 PM.

The mock indictments started as an opposition to the War in Iraq but grew to five different charges as the group continued to evolve.

* Wars of aggression in Afghanistan and Iraq
* The torture of prisoners
* Global warming policies
* An “abstinence only” policy of reproductive education to determine international aid (commonly referenced as the global gag rule)
* The “fatal response to Hurricane Katrina.” 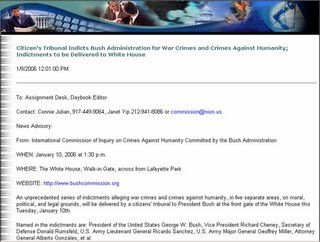 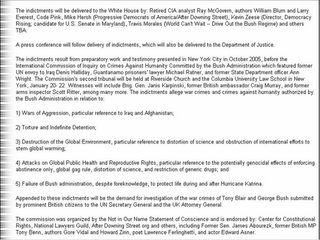 Or, heck, just go HERE and read the announcement.

The full indictments are HERE.

Larry Everest, one of coalition’s organizers, told Cybercast News Service that the Bush administration continues to “avoid these issues and refuse to come clean about them.

“We feel that the actions of the Bush administration do rise to the level of war crimes and crimes against humanity. People of conscience have the obligation to investigate this and bring it to light,” Everest said.

He also defended the group’s decision to expand the reach of its “indictments.”

“All of these are towering crimes, and all may — we need to investigate this to determine whether it is true — may rise to the level of war crimes and crimes against humanity,” said Everest.

The group plans to conduct what it calls “hearings” relative to the “indictments” in New York City from Jan. 20 to 22.

A spokesman in the Bush White House Tuesday indicated that there would be “no comment” on the latest criticism from the anti-war coalition.

There is no word on the President’s reaction.