“Just as this economy is getting going, there are some in Washington who want to take the money out of your pocket. They think they can spend it better than you can.” 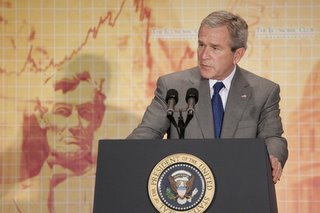 President George W. Bush addresses an audience at the Economic Club of Washington, D.C., Wednesday, Oct. 26, 2005. President Bush is the first President to address the Economic Club, which was formed in 1986. (White House photo by Paul Morse)

With Bush’s approval ratings on the economy remaining low at 39 percent and the economy cranking in near record performance the Bush Administration was out promoting gains on Friday. The media has been mostly silent on the tremendous economic data since the Bush tax cuts took effect.

“It’s getting pretty hard for the critics to make the case that the tax cuts weren’t good for the economy,” said Cheney, speaking before machinists inside the hulking Harley warehouse.

It is sad that democrats have gotten such a pass from the media in spinning a gloomy economy (even in the AP article about this latest Bush speech).

Jayson at Polipundit continues doing the best job with the facts on the economy:

Here are the key figures from 2005’s labor markets:

The effect of those tax cuts on total non-farm payroll employment can be illustrated as follows:

The Bush White House also has more data available at their website.
HERE and HERE