Michael Jackson traded in his signature white glove for two black ones and a burka in Bahrain today. 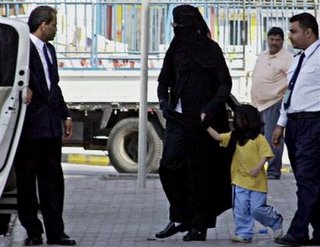 Michael Jackson, center, wearing a traditional Arabic women’s veil and all-covering gown called an abaya, holds the hand of one of his children, also veiled, as they walk toward his car on Wednesday, Jan. 25, 2006, behind a Manama, Bahrain, shopping mall. Jackson is a reclusive resident of the Gulf island country since being cleared of child molestation charges. (AP Photo/Hasan Jamali) 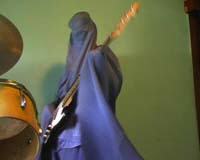 If this is going to be a new look for Michael, maybe he will call the Burka Band to play backup at his next concert?

I prefer their international Hit Song * No Burka *, myself. (via ATATAK)