Nogales, Arizona Authorities were tipped off to a drug tunnel this week,
VIDEO HERE

Two tunnels were discovered on the US Border with Mexico just this week. As of April of last year, 21 tunnels had been found since 1990.

Drug traffickers are relying more on tunnels to avoid tightened US port security following 11 September. Four of the 21 tunnels had cart and rail systems while nine were equipped with lights and ventilation systems. Some had steel rails to support carts to be drawn through. Seven were in the San Diego County region and 14 were in the Arizona region. Twenty were near ports of entry. 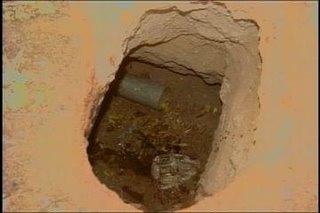 This week’s discovery was the third time a tunnel was found at the same home just across the street from the International border.

The tunnel was discovered on Monday and has a room for marijuana storage:

Santa Cruz County Metro Task Force, along with Border Patrol agents, made the discovery around 10 a.m. when they got information that an operational drug tunnel could be found in the 400 block of West International Street, said Santa Cruz County Sheriff Tony Estrada.

The tunnel stretched about 40 feet from the border, Estrada said. There were two openings, one in Nogales, Ariz., which came 10 feet past a sidewalk into a driveway near a home, and the other in Nogales, Sonora, he said.

Both entryways have since been blocked, Estrada said.
“I don’t know how long the tunnel has been in existence,” Estrada said. “But it is not very wide; it is just small enough for a thin person who would have to wiggle their way through.”

In the tunnel, there was a man-made room where marijuana was stored, he added.

As border security tightens, officials may be seeing more tunnels between the borders:

Estrada saw his first drug tunnel in Nogales in a church in 1995. “Quite a surprise, quite a novelty as a matter of fact but it opened their eyes as to how these people want to continue working and moving drugs across the border,” Estrada said.

He said that 19 tunnels have now been found in and around Nogales, and expects to keep finding them, since the Nogales wash runs underground and connects to storm drains on both sides of the border.

“I think we will because as you put more pressure at the ports, you have more Border Patrol, you have more agents, you have Homeland Security, here at the border, they’re going to be looking at more ways to get the drugs across, and that’s a good way to do it,” Estrada said.

It’s such a good way that more than the law alone will be needed to keep smugglers from burrowing into the country.

Another suspected drug tunnel was discovered in San Diego this week when a partial collapse exposed the route cut under the border at San Ysidro, near the southern California town of San Diego.

The US House of Representatives has approved legislation which calls for the construction of a fence along one-third of the 3,200-kilometer-long (1,988-mile) border to stop illegal immigration and drug smuggling. The Senate has yet to vote on the measure.

This was the third time a tunnel was discovered at San Ysidro in 3 years.