But, this comes with no awards!

Samuel Alito plans on attending the State of the Union Address tonight. 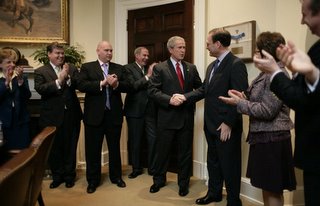 President George W. Bush shakes hands with Judge Samuel A. Alito in the Roosevelt Room of the White House Tuesday, Jan. 31, 2006, after the Senate voted to confirm Judge Alito as the 110th Justice of the Supreme Court. (White House photo by Eric Draper)

Not only did the Democratic Senators look like big jerks in the Confirmation Hearings of Judge Alito, but the judge was confirmed today despite their awful personal attacks and bloviating. And, after the fierce antics by the liberal democrats, at the end of the day, most Americans still thought that Alito should be confirmed.

The bullying democrats looked awful to the American public who caught glimpses of the Confirmation Hearings or saw Martha-Ann Bomgardner (Judge Alito’s wife) all choked up on the evening news. And, their liberal base wasn’t pleased with their efforts anyway. Half of their ranks are talking about bolting from the party.

Despite the attacks of Teddy Kennedy and the bloviating of “Rambling Joe” Biden, the democrats won no favors with their liberal base. It wasn’t just the Republicans who are beating up on them!

Blogs for Bush is asking readers to remember the Republican Party today.
Polipundit has joined in.

It would be a great day to show your appreciation to “W” and the Republican Senate by making a donation and letting them know that you would like to see more days like this! (Or, you could wait until after the State of the Union Speech tonight.) Make a donation in a unique number (like $.55 for 55 GOP Senators, or $.54 if you want to dock the party a penny for Lincoln Chafee J, or whatever the number of yes votes). It’s a good way to get your message across to the Republican Party.

HERE is a contribution page.