It makes you wonder just what was going on here? 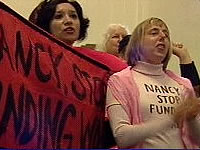 Nancy Pelosi was greeted by Medea Benjamin and other Code Pink members in San Francisco on Saturday:

Medea Benjamin, Code Pink (who interrupted the RNC Convention in NYC when she rushed within 15 feet of Vice President Cheney) said: “Get us out of Iraq. Use the billions we’re spending on Iraq to fund our schools, to fund our health care system, to rebuild New Orleans. We need this money here at home.”

Rep. Nancy Pelosi, House minority leader: “Well, I won’t agree with them that I should not support meeting the needs of our men and women in uniform at this time.”

Pelosi also addressed national security issues at Saturday’s meeting. She wants the United States to spend between nine and ten billion dollars to buy back nuclear materials currently for sale on the market.

The protesters stood in front of the stage Pelosi was speaking from for the whole two hours. Sweet!

“Speak to Bush’s impeachment,” members of the crowd chanted at one point.

Pelosi called for a congressional investigation on the revelation that the Bush administration had authorized domestic spying, but pooh-poohed calls for impeachment hearings against the president.

“I think we should solve this issue electorally,” she said, urging audience members to channel their energy into the 2006 elections.

The protesters stood quietly in front of Pelosi waving their signs for the entire two-hour meeting, while hecklers from the audience frequently interrupted the talk.

Nancy Pelosi said yesterday that she wants to “meet the needs of the men and women in uniform” but she has voted against funding America’s defense on several occasions:

Another bright spot in my Congressional talks was Nancy Pelosi from San Francisco, the house minority leader. I had, up until last Friday, been very disappointed with the lack of leadership that I saw that she was exhibiting on this war. Our talk was very productive and she is, I believe, willing to take a new leadership role in bringing our troops home from this quagmire. She said it was because of the leadership that I have shown by going down and challenging the Emperor that more House Dems will grow back bones and challenge the President and his lies.