In the early morning hours of Friday, December 30, 2005, as many as 20,000 Egyptian riot police swinging clubs swept into a tiny Cairo park to evict 2,000 or so Sudanese squatters. After being hosed with water cannons on this cold winter night, police moved in and violently evicted the refugees from their squatter camp set up in the Cairo park. 27 Sudanese were killed in the violence. 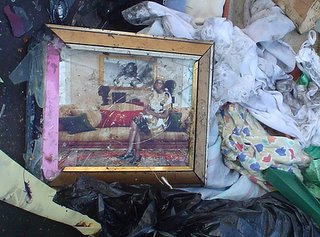 Egyptian blogger Nora Younis was at the park. This is a picture down on the park from one of the high rise buildings in the area. Nora watched this tragedy and was able to write about her experience on Friday. Nora also has amazing pictures from this tragic event in Egypt. 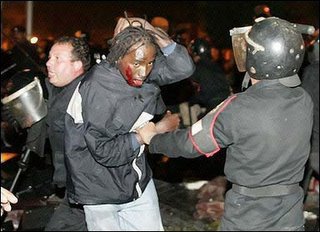 A Sudanese man is beaten by Egyptian riot police. Egypt is under fire over the deaths of 25 Sudanese refugees after riot police wielding sticks and water cannon forcibly removed hundreds of demonstrators camped outside UN offices in Cairo.(AFP/Cris Bouroncle)

After Egyptian authorities stormed a squatters camp in Cairo killing 27 Sudanese demonstrators, the Government in Cairo today announced that it would deport 600 of the 2,000 held back to Sudan:

“The targeted number of Sudanese who will be flown home … is around 600,” Major General Beshir Ahmed Beshir, who chairs a committee formed to receive the deportees, told AFP on Monday.

A Sudanese diplomatic source, meanwhile, said the death toll among the refugees after the clashes with security forces outside the Cairo offices of the UN refugee agency UNHCR had risen to 27.

The dead include 12 children and eight women, a spokesman for Sudan’s embassy in Cairo told AFP. The toll rose after more people died of their injuries in hospitals across the capital.

the government was holding 2,174 Sudanese at four locations in and around Cairo, in the wake of the violence.

Thousands of riot police wielding batons and water cannon last week forcibly broke-up the three-month protest by Sudanese refugees and asylum-seekers aiming to draw attention to their cause. 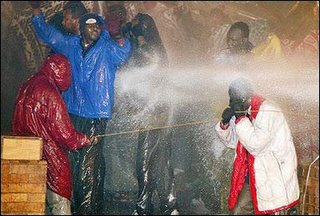 Sudanese men are sprayed with water by Egyptian riot police moments before the forceful evacuation of thousands of Sudanese refugees on their third month of protest outside UN offices in Cairo. Egypt’s independent and opposition press has blasted the manner in which police forcibly broke up the protest by Sudanese refugees that left as many as 25 people dead.(AFP/File/Cris Bouroncle)

The Egyptian press blasted the government on the manner in which they broke up the protest killing 27 in the vicious assault on the squatters camp:

“Shame on Egypt,” thundered the headline in the Al-Arabi newspaper, as relatives held funerals across Cairo for the dead, who included women and children.

“Prosecute the murderers and dismiss the minister of interior,” the paper demanded Sunday.

Thousands of riot police wielding sticks and water cannon forcibly removed hundreds of Sudanese demonstrators in an operation that began at dawn on Friday.

The independent Al-Isboa newspaper called it “the night the human conscience was lost.”

Egypt announced the appointment of its first veiled minister today.

Freedom for Egyptians wrote about the bloody history lesson Egypt gave its neighbors on Friday, along with a wonderful personal story on the Sudanese in Egypt.

Rantings of a Sandmonkey is sickened by this “national shame.”