Democrats at all levels have attacked Republicans for ties to indicted lobbyist Jack Abramoff and his Indian tribal clients. They do this despite the fact that 40 of the 45 members of the Senate Democrat Caucus have taken money from Abramoff, his associates, and Indian tribe clients. 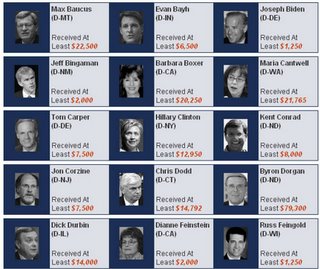 (click on pictures to enlarge)
Senator Byron Dorgan, the Vice Chairman Of The Senate Panel Currently Investigating Lobbyist Jack Abramoff, received at least $79,300 from Abramoff and his associates and clients.

Dorgan even held a fundraiser in an Abramoff Skybox:

The Choctaw tribe, an Abramoff client that was a primary focus of the Senate hearings, sponsored a fundraiser on March 28, 2001, for Dorgan’s political group, the Great Plains Leadership Fund. The event treated Dorgan and his donors to a bird’s-eye view of a professional hockey game from a skybox Abramoff leased in Washington’s MCI Center, while lobbyists got the chance to bend his ear.

Dorgan says he will not step down from the investigating committee. (same article) 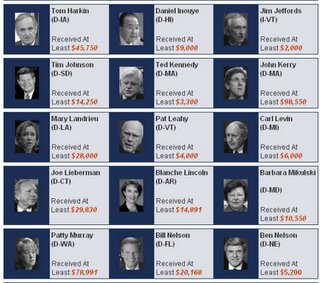 That oh, so popular, MCI Skybox…

Tom Harkin paid the tribe for use of its Skybox and he failed to account properly for two fundraisers he held in lobbyist Jack Abramoff’s skybox at WashingtonÂs MCI Center in 2002 and 2003.

Washington State Senator Patty Murray received $14,980 from 2002 to 2004 from the Saginaw Chippewa Indian Tribe in Michigan(?)

Harry Reid has declined to comment on whether he attended any functions there. But, between 2001 and 2004 Reid received $61,000 from donors with links to Abramoff, Reid’s office confirmed. 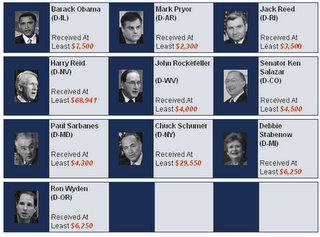 Here is a Slide Show of the East Coast 13 (dems and republicans) who accepted contributions from Abramoff.

Capital Eye has the monstrous list of all of the recipients of Abramoff’s funds.

Republican Vet has the Democratic Senators listed on his site with the totals they took from the Abramoff bunch.

I hope Howard Dean gets this information before he makes any more mistakes.

I look forward to his apology!

Ace notes the incongruity of Dean’s comments and reality.