The Church bells are playing a different song this morning in Tallmansville, West Virginia. 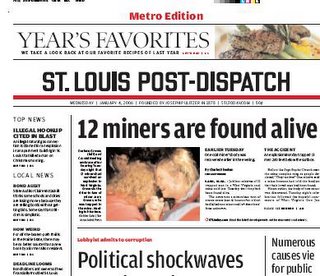 The St. Louis Post Dispatch like most of America, was fooled by the news late last night and woke to the tragic news this morning.

Americans for Freedom has thoughts on the free press.

The headlines this morning are that 12 of the 13 miners who were trapped underground were found dead. What devastating news after the jubilation at 1 AM. Prayers today continue to go to the families and friends of the miners in West Virginia.

West Virginia was praying for a miracle… 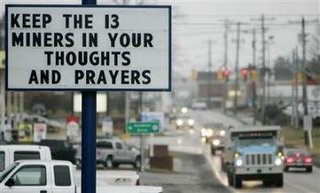 …But after the jubilation from late last night, only one miner came out alive!

Here is the very weak and inappropriate response from the Mining Company after news broke that there was only one survivor:

Three hours later, Hatfield told the families that “there had been a lack of communication, that what we were told was wrong and that only one survived,” said John Groves, whose brother Jerry Groves was one of the trapped miners.

“There was no apology. There was no nothing. It was immediately out the door,” said Nick Helms, son of miner Terry Helms.

Chaos broke out in the church and a fight started. About a dozen state troopers and a SWAT team were positioned along the road near the church because police were concerned about violence. A Red Cross volunteer, Tamila Swiger, told CNN people were breaking down and suffering panic attacks.

Company officials waited to correct the information until they knew more about the rescue, even as people celebrated false news.

“Let’s put this in perspective. Who do I tell not to celebrate? I didn’t know if there were 12 or 1 (who were alive),” Hatfield said.

It’s not like they were keeping the score of a football game from them,… It was the lives of their loved ones! What a pathetic response by the company!

Randal McCloy is the lone survivor from the disaster in West Virginia.

How horrible this must be for those families who were just a few short hours ago singing and crying with joy at the Sago Baptist Church.

From late last night…
UPDATE: MINERS ARE FOUND ALIVE! (10:50 PM CST)
The 12 trapped miners were found alive just minutes ago! Geraldo Rivera is reporting the news on FOX News at this time. The bells are ringing in the Catholic Church!

FOX News is reporting the news! 12 miners were rescued just minutes ago!

Twelve miners caught in an explosion in a coal mine were found alive Tuesday night, more than 41 hours after the blast, family members said.

Bells at a church where relatives had been gathering rang out as family members ran out screaming in jubilation.

There were hugs and tears among the crowd outside the Sago Baptist Church loacted near the mine, about 100 miles northeast of Charleston. 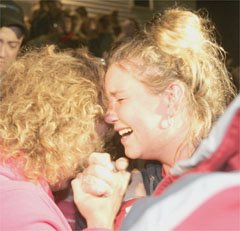 Darline Graves, left, and Crystal Neeling hold each other to celebrate at Sago Baptist Church after hearing the report indicating the miners are alive. Graves is the sister-in-law of trapped miner Jerry Graves and Neeling is his niece. (AP Photo/Kiichiro Sato)

Here is a partial list of the miners who were trapped underground for 41 hours:

Terry Helms, the fire boss, was found earlier in the night. He was just identified as the lost miner from the mining accident.

One body was discovered tonight inside the West Virginia mine where 13 miners were trapped:

The unidentified body was found about 700 feet from a mine car, and it appeared the employee was working on a beltline, which brings coal out of the mine, said Ben Hatfield, chief executive officer for the mine’s owner, International Coal Group Inc.

Red Cross volunteer Tamila Swiger, who was with miners’ families inside a church, said family members were “passing out and crying and just really in bad shape” after hearing about the body from Gov. Joe Manchin.

What a nightmare. Pray for the miners and their families today. 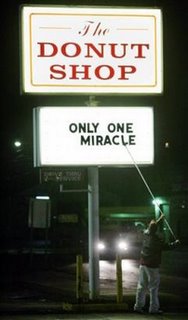 Steven Scott of the Buckannon, W.Va., Donut Shop, changes a sign early Wednesday, Jan. 4, 2006, to reflect the one miner out of thirteen who survived 41 hours underground after being trapped by a Monday morning mine explosion at Sago Mine in Tallmansville, W.Va. (AP Photo/Gene J. Puskar)

Pundit Guy has more on the families reactions last night where you can just feel their elation with the news at that hour. It is hard to imagine how they must be feeling this morning.

Pajamas Media has a roundup on the s
ad news this morning.
Michelle Malkin asks, “What went wrong?”
California Conservative calls it a Grave Error.