Video from Dongzhou Village has made its way out of Communist China. 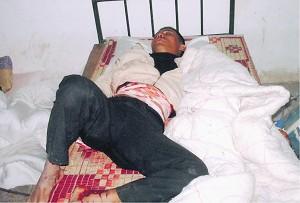 An injured Dongzhou Village man with visible wounds on his side and feet recuperates from Tuesday’s carnage when government forces fired on land rights protesters. (Epoch Times)

Today Chinese officials came out and defended firing on innocent protesters in Dongzhou Village last Tuesday, December 6, 2005 where (they claim) three protesters were killed. Dongzhou villagers, however, claim that the death toll is much higher with as many as 70 protesters shot dead by authorities. China reported today that authorities have arrested the local official who ordered governmnet forces to shoot and kill the land reform protesters last week. 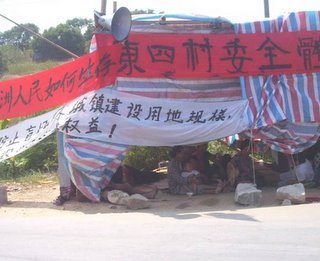 October 9, banners besides Dongzhou Road and the temporary tent set up by villagers for the protesters to take a rest in. (The Epoch Times) 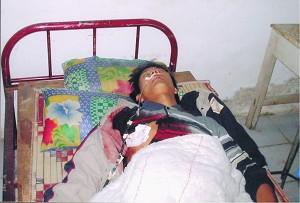 VILLAGERS BEG THE GOVERNMENT SOLDIERS FOR THE BODIES OF THEIR LOVED ONES,
VIDEO HERE
(Very Short- 10 Seconds)

Earlier this year six people were killed and several more injured in violent clashes in the village of Shengyou, south of the Chinese capital Beijing. What made this attack on Chinese civilians different than before was that this massacre by the authorities on protesters was secretly filmed and snuck out to Western media outlets.

The Washington Post put the entire video up on their online site.
VIDEO OF THE MASSACRE AT SHENGYOU HERE
* WARNING * – This video is extremely violent! There are gunshots throughout the 3:38 minutes of film. You see and here what sound and look like bomb blasts at 5:18:13 of the video clip.

The BBC also has video of the Shengyou carnage.
SHOCKING FOOTAGE OF THE SHENGYOU RIOTS WHERE 6 PEOPLE WERE KILLED,
BBC VIDEO HERE

Blogs for Industry has disturbing news about villagers saying they saw police dress up three of the villagers’ bodies in police uniforms and taking photos of them!

Timor-I-Leng has several postings on what he calls this “Trouble in Paradise” and notes that six tanks were repositioned outside of the village.