“There was a lot of criticism about the Berlin Wall, and the wall that Israel is building along its border with Palestine, and now it´s happening here…”

…Except that the Berlin Wall kept people in instead of out. 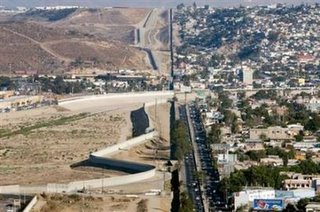 Three layers of fences separate the U.S. and Mexico (R) along the border in San Diego December 9, 2005. Mexican President Vicente Fox denounced as ‘disgraceful and shameful’ on Wednesday a proposal to build a high-tech wall on the border to stop illegal immigrants. (Fred Greaves/Reuters)

Vicente Fox and Mexico were not happy about the legislation that passed the US House last week to build a 770 mile barrier between the US and Mexico:

VICENTE Fox, the president of Mexico, has likened a United States plan to build a 700-mile fence along their border to the Berlin Wall.

Speaking at an event for migrants, Mr Fox said barriers between countries belonged in the past and, like the Berlin Wall in 1989, were torn down by people striving for democracy.

“This wall is shameful,” Mr Fox said. “It’s not possible that in the 21st century we are building walls between two nations that are partners.”

Fox said that the proposal is shameful for a country made up of immigrants. Immigrants in the US send nearly $20 billion home to Mexico, second only to oil in revenue:

On Friday, the U.S. House of Representatives voted 239-182 in favor of an immigration enforcement bill, which includes a proposal to build 700 miles of fence through parts of California, Arizona, New Mexico and Texas.

Under the bill, soldiers and police would help stop people sneaking across, and employers would have to check the legal status of their workers.

Fox said the measures were hypocritical for a country made up of immigrants. “When we look at their roots, the immense majority are migrants, migrants that have arrived from all over the world,” he said.