After the very successful elections yesterday in Iraq, US General George Casey says he would make recommendations in the next few weeks about troop withdrawals from Iraq, and he expects the force level will drop back to 138,000 by early February.

Speaking from Iraq, Gen. George Casey told Pentagon reporters that by late next fall, the Iraqi military should be able to largely take the lead in the country’s defense, with continued support from U.S. and coalition transition teams.

“We just had the election, we’re doing our assessments, and I’ll make some recommendations in the coming weeks here about whether I think it’s prudent to go below that baseline,” said Casey, adding that the two extra battalions that were sent to Iraq for election security will be heading home in January.

But he made it clear that U.S. forces will still be in the lead in portions of Iraq until sometime in 2007. 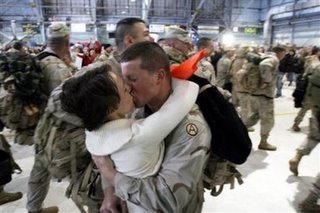 Casey gave his interview via satellite from Iraq:

“There are some tough political and economic challenges that Iraq has to deal with, not just next year but in the coming years,” he said. “We cannot expect the insurgency to just go away because of yesterday’s success, but we should expect it to be gradually weakened and reduced as more and more Iraqis adopt a political process and the root causes of the insurgency are addressed by the new Iraqi government and the coalition.”

Earlier on Friday, Casey hailed the high turnout and low levels of violence in Iraq’s elections but warned not to expect the insurgency to be quickly defeated.

Robert Mayer at Publius Pundit has more thoughts on the good news from Iraq and makes predictions on the future level of insurgency.