Fears of sectarian strife subsided on Saturday after President Talabani gathered Iraqi leaders for meetings on how best to deal with election disputes. It was announced that individuals who call for violence may be arrested and prosecuted. 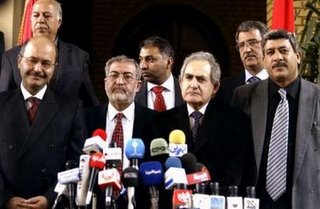 Iraqi Planning Minister Barham Salih (L), Iyad al-Samarrai (2nd L) of the National Concord Front, Mahdi al-Hafez (2nd R) of the Iraqi National list and Salam al-Zubawi (R) from the National Concord Front hold a news conference after meeting with Iraqi President Jalal Talabani in the gardens of his home in Baghdad December 24, 2005. Talabani attempted on Saturday to mediate a growing political row, set off by contested general election results, amid fears the dispute could fuel the insurgency. (REUTERS/Karim Sahin/Pool)

President Talabani organized a meeting today with a number of Iraqi leaders to discuss the parliamentary election concerns:

Iraqi President Jalal Talabani was attempting on Saturday to resolve a growing political row set off by contested general election results, amid fears the dispute could fuel the insurgency.

A meeting of top leaders was underway on Saturday morning, his office said, giving no details.

Some two dozens parties, including the main Sunni Arab coalition, on Thursday called for a re-run of the December 15 elections because of alleged fraud.

Elements from the Sunni Arab minority, dominant under ousted dictator Saddam Hussein, are seen as the backbone behind the insurgency.

Electoral commission official Adel al-Lami on Saturday said the commission was investigating some 1 500 complaints, but he appeared to rule out any large-scale new polling.

“If need be voting can be repeated in small areas, but there is no evidence until now this will be required,” he said.

Complaints concerned no more than five percent of the total of some 10 million votes cast, he added.

Early results suggest Shi’ite-based religious parties, dominant in the outgoing government, will have a commanding position in the next parliament.

Omar at Iraq the Model (via Instapundit) has more on the press conference warnings on violence.

As political squabbling continued in Baghdad, national security adviser Mowaffaq al-Rubaie told reporters in Najaf that he wanted detainees being released by the U.S. military to be re-arrested. They include Saddam Hussein’s weapons scientists Rihab Taha and Huda Ammash — “Dr Germ” and “Mrs Anthrax.”

A lawyer for some of the detainees, believed still to be at a U.S. base for their own protection, dismissed the demand as “pure theater” and said they would soon leave Iraq.

A Shia leader claimed that the Sunni extremists were behind the protests on Friday:

Jawad Al Maliki, a Shia Alliance leader, ruled out any election re-run. “One has to accept the results,” he told a news conference.

He also lashed out at demonstrators, saying “any appeal to violence against the government can be considered as inciting sectarian strife and terrorism.”

“What’s going on in the streets is partly the work of Takfiris (Sunni extremists) and gangs run by the former regime,” he said.

Hadi Al Amiri, head of the Shia Badr Organisation, acknowledged that election result appeals were legitimate, but added that “they must be made lawfully”.

“We call on demonstrators not to make threats,” he also said, warning that those doing so could be prosecuted.

Meanwhile, the announcement by Defense Secretary Donald Rumsfeld to decrease combat troops is seen as the first step in a number of planned troop reductions. 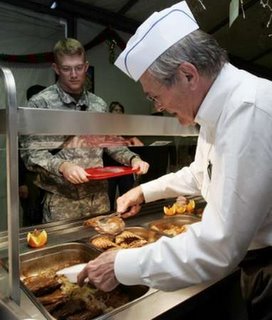 U.S. Secretary of Defense Donald Rumsfeld (R) serves Christmas dinner to soldiers in Mosul, Iraq, December 24, 2005. Rumsfeld said on Friday the number of U.S. combat forces in Iraq would be cut by some 7,000 by early next year, but the numbers involved in training Iraq’s new military would increase. (REUTERS/Jim Young)

Yesterday, the majority Shia announced a willingness to form a coalition government with minority parties.