After history was set on Thursday with Iraq’s thrilling vote;
After nearly 70 percent of eligible voters braved death to have their voice heard;
After millions of Iraqis walked, were carried, or were pushed to get to the polls;
After whole families dressed their children and put on their finest clothes to celebrate freedom,

“Our Leader Celebrates Another Success” 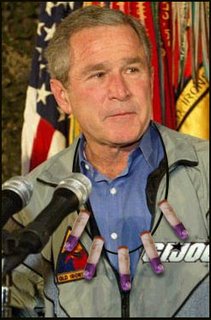 This “Blue Finger-Necklace on Bush” is posted at “Jesus General” blog, a very popular and award winning liberal “humor” blog.

After 25 million people were set free from one of the most brutal murdering dictator’s in history, all the Left can say is that this election was some kind of a joke for Bush.

To the Left in America, democracy and freedom with great sacrifice has now become a crazy joke!

That is just sick.

This sad display from above is exactly what Mark Steyn was talking about today in the Chicago Sun-Times:

George Clooney, the matinee idol, made an interesting point the other day. He said that “liberal” had become a dirty word and he’d like to change that. Fair enough. So I hope he won’t mind if I make a suggestion. The best way to reclaim “liberal” for the angels is to get on the right side of history — the side the Iraqi people are on. The word “liberal” has no meaning if those who wear the label refuse to celebrate the birth of a new democracy after 40 years of tyranny.

Yet, if you wandered the Internet on Thursday, you came across far too many “liberals” who watched the election, shrugged and went straight back to Valerie Plame, WMD, Bush lied.

Bush lied, people dyed. Their fingers. That’s what this is about: Millions of Kurds, Shia and Sunnis beaming as they emerge from polling stations and hold up their purple fingers after the freest, fairest election ever held in the Arab world. “Liberal” in the American sense is a dirty word because it’s come to stand for a shriveled parochial obsolescent irrelevance, of which ”Good Night, and Good Luck,” Clooney’s dreary little retread of the McCarthy years, is merely the latest example.

Others who don’t have that same freedoms, see things differently.