As electoral workers opened each ballot box they said a quick prayer. 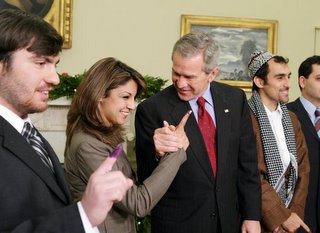 President George W. Bush stands with out-of-country Iraqi voters Thursday in the Oval Office of the White House. The President told the media later, “I was struck by how joyous they were to be able to vote for a government — a permanent government under a new constitution.” (White House photo by Paul Morse)

There was a huge turnout for elections yesterday in Iraq where many voters took the whole family with them to the polling stations:

Turnout in 10 hours of voting was at least 10 million, or 67 percent, the head of Iraq’s Electoral Commission told Reuters, much higher than the 58 percent who voted in the previous election on January 30, when most Sunni Arabs boycotted.

In Saddam Hussein’s home province more than 80 percent of voters turned out, a local official said. Polling stations in parts of Iraq were kept open an extra hour to let those waiting in line cast ballots.

In Sunni Falluja turnout was 70 percent, officials said, and in Kurdish regions and the Shi’ite south it was also high.

This round of voting was relatively calm compared to the election in January when 40 people were killed. There are reports that at least 5 insurgents were killed on election day:

While voting went well generally, two people were killed in mortar attacks on polling stations in Mosul and Tal Afar in the north and three, including a U.S. Marine, were wounded when a mortar round landed in Baghdad’s Green Zone as polls opened.

The interior minister said a suicide car bomber was shot dead in Baghdad and police said they arrested another east of the capital.

Eight other people, including two Iraqi soldiers, were killed in other violence. Among those, four insurgents died when a bomb they were planting exploded on the main road in Isshaaqi, 90 km (60 miles) north of Baghdad, police said. 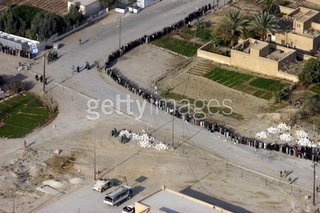 In this handout photo provided by the U.S. Marines, voters wait in line around a polling site to vote for the first fully constitutional parliament on December 15, 2005 in Barwana, Iraq. Amid high security, large numbers of Iraqis turned out to cast their ballots for a national parliament due to serve for the next four years. (Photo by James P. Aguilar/U.S. Marines via Getty Images)

“The Independent Electoral Commission of Iraq is to be commended on the way it has performed its role under the difficult circumstances prevailing in Iraq,” said Paul Dacey, spokesman for the international observers.

Iraq’s staging of major elections in January, October and December would have been a major challenge even for well-established democracies, Mr Dacey said.

The country’s electoral commission announced on Friday that 320,000 Iraqis living abroad voted in the election.

Yesterday, was also the first time that an organized group of bloggers gave the best reporting on the ground for any major international story. Pajamas Media had blogger/reporters throughout Iraq updating the days historic events with reports that were missed by the mainstream news.

Iraq the Model summed up yesterday’s events with this letter from a friend:

Like eyelashes close in delight upon the sight of one’s lover, the boxes closed their lips on Iraqis’ ballots.
The tyrants forced us to remain silent for decades but yesterday our fingers spoke out loud in purple.
The fingers wore their purple wedding dress while the enemies wore the black of hatred and evil.
Elections have become the new tradition of Iraqis, those new democrats who proudly want to show the world their new experiment but on the other side there are our “cousins” who still want us to go back to the sheep barn.

And, Robert Mayer says there are clear skies ahead.

A wonderful day for the new Middle East Democracy.