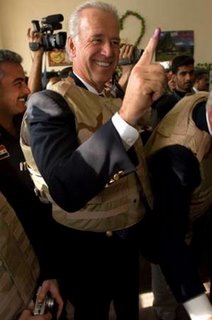 Senator Joseph Biden (D-DE) showed up in Iraq today to witness the country’s historic parliamentary elections. Senator Biden has not always been a strong supporter of the Administration on the Iraq War. And, Biden has come under fire at various times for his statements on Iraq. In August he was attacked by former generals for his bogus claims on the number of trained forces in the Iraqi military:

“My judgment is today there are probably 110 battalions fielded, probably 36 of them are capable of taking a lead in active operations.” Each Iraqi battalion contains 600 to 700 troops, McCaffrey said, putting the full number of self sufficient Iraqi troops at at least 21,600 – more than seven times what Biden claimed.

“That’s a huge force and it’s going to start to make a difference,” he added, explaining that he based his information on personal discussions with “General George Casey in country and Dave Petraeus, a guy who’s actually in charge of trying to build the Iraqi security forces.”

Just six months ago Biden attacked Bush on the Adminstration’s plan for Iraq in his first campaign speech for the ’08 election:

Democratic Sen. Joe Biden in June accused President Bush of “misleading statements and premature declarations of victory” in Iraq and called on him to change course.

“The disconnect between the administration’s rhetoric and the reality on the ground has opened not just a credibility gap, but a credibility chasm. Standing right in the middle of that chasm are 139,000 American troops some in their third rotations,” the Delaware senator said in a speech at a Washington think tank.

He said Bush should level with voters about the stakes and risks in Iraq and push to get allies more involved in security and reconstruction efforts. While the address broke little new ground, it was arguably the first campaign speech of the 2008 race.

In another speech in December of last year, Senator Biden claimed that although we had won every battle that we were doomed in Iraq:

The Democratic Party’s top foreign policy expert in the Senate said Sunday that the U.S. is losing what he described as a war with “too little legitimacy” in Iraq, even though attacks against U.S. troops have plummeted in recent weeks and enemy leader Abu Musab al-Zarqawi has publicly proclaimed the battle of Fallujah a massive U.S. victory.

In a morale-busting diatribe that’s certain to bring delight to the hearts of America’s enemies worldwide, Sen. Joe Biden complained that while U.S. forces have won every battle, the Bush administration’s flawed strategy has doomed the war effort.

“We’ve won everything we’ve tried to do, including Fallujah,” Biden told ABC’s “This Week.” “But then we’ve lacked the resources to secure what we’ve won. And we’re still paying an awesome price for the initial failures on policy of this administration, of going in with too little power and too little legitimacy.”

Hugh Hewitt gives advice to Senator Joe about dealing with Janeane Garofalo and other anti-purple finger types on the Left.

Kokonut Pundits has Sen Biden’s comments to the media after his long day in a bullet proof jacket.