The $500 fiberglass Baby Jesus that was stolen from the Belleville, Illinois Public Square Nativity Scene on Thursday has been replaced… 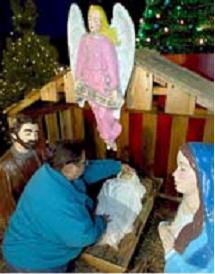 …with a Cabbage Patch Kid in swaddling clothes.

The last stolen Baby Jesus ended up at Applebees:

“It’s just kind of sad to be taking the baby Jesus at Christmastime,” Helen Cook, a dispatcher for a towing company and a former member of the St. Clair County Board, and caretaker of Baby Jesus said Wednesday. “There’s a lot of people that drive from far away to see it. When they go to the (downtown Belleville) Gingerbread Walk, they drive around the square to look at the Christmas display.”

The Jesus figurine was taken from the Public Square Nativity scene at least once before. On Dec. 4, 1998, a hostess at the Applebee’s restaurant in Fairview Heights called police when a 24-year-old man walked in with the baby Jesus and ordered a round of drinks.

He later said he took the statue while out drinking with friends. He was charged with one count of misdemeanor theft.

The local Applebee’s has been notified of the latest theft of Baby Jesus.

Hat Tip Allman and Smash in the Morning at 97.1 FM
& Allman’s Electric Stove

The Right Place Blog has made a DNC list of favorite Christmas songs.